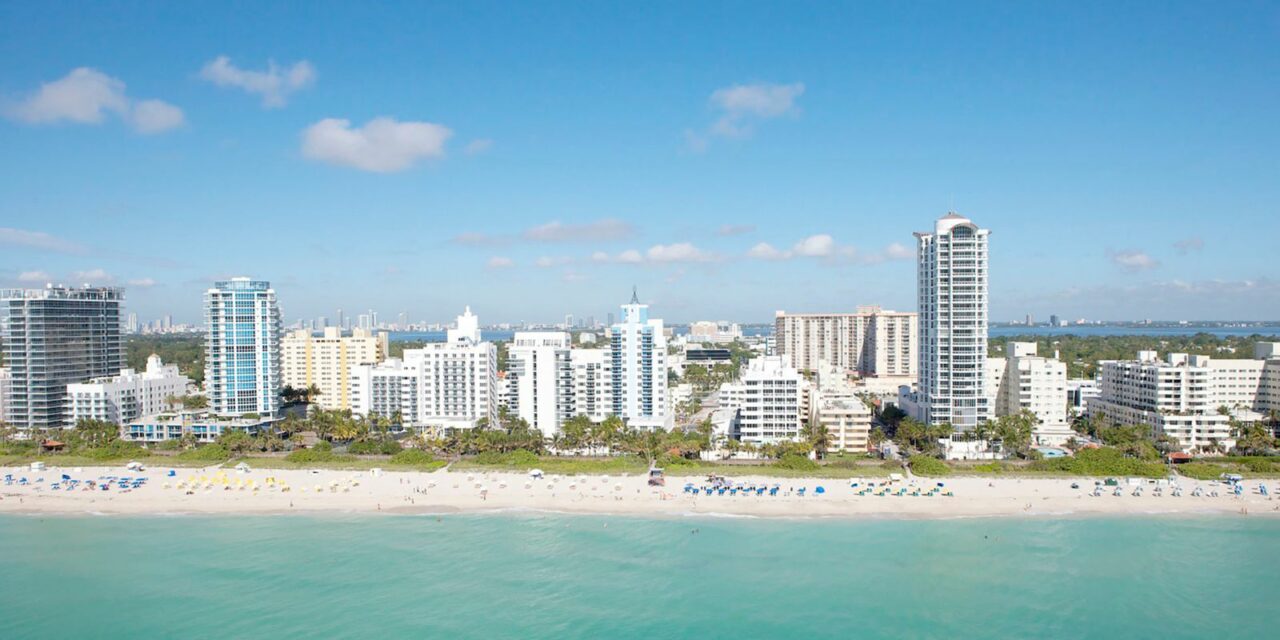 As the New Year kicks off, Miami is buzzing with excitement and there is no shortage of things to do. From art shows and festivals to concerts and sporting events, there is something for everyone to enjoy. Whether you’re a local or just visiting, these events are sure to make your January in Miami a memorable one.

Miami is an amazing city filled with culture, scenic beaches, amazing hotels, and fantastic restaurants. If you’re planning to visit Miami in January, here is a list of must-experience events this month that will tempt you to plan a trip.

The South Beach Jazz Festival is back. This festival takes place throughout Miami Beach to showcase world-renowned musicians. From an exclusive night with Grammy-nominated legendary Jazz pianist Monty Alexander to Mambo Night with the Big 3 Palladium Orchestra’s first-ever appearance in Miami, the 2023 South Beach Jazz Festival brings a weekend full of fabulous music to our shores. All styles of jazz will be represented, from New Orleans to Brazilian, and all performances are free and open to the public.

Enjoy a Night out with Miami’s #1 Show, Cocktails & Cabaret, featuring the world’s best Burlesque Queens, live music, & Showgirls. In the spirit of this one-of-a-kind production, you’re invited to an exclusive new immersive cabaret at the Gulfstream Park.

Today’s Miami Beach is a haven for all kinds of art and artists but, historically, it’s most known for Art Deco. Launched in 1976 by the nonprofit organization, Miami Design Preservation League (MDPL), Art Deco Weekend is a three-day celebration of the design movement – a weekend filled with art, architecture, history, culture, entertainment and more.

One hundred years after the era that inspired it, The Great Gatsby Party® returns, ready to channel the exuberance, decadence, and spirit of revelry of the Roaring Twenties. The 2023 festivities kick off at Miami‘s Alfred I. Dupont Building. The event has been tailor-made to dazzle—consider your ticket the key to an era of absolute decadence and excess. Live music, aerialists, theatrical acts, dancers, contortionists, showgirls, stilt walkers, and other performers add an air of possibility to the event.

Motorcar Cavalcade, the lavishly entertaining, must-attend event for every automobile enthusiast from connoisseur to the car-curious, announces its Concours d’Elegance to take place January 14-15, 2023, at the prestigious JW Marriott Turnberry Resort & Spa in Aventura, Miami. The two-day event is one of the country’s leading showcases for the rarest, most exotic, and utmost luxurious cars — and their owners — to gather, celebrate, and share the artful design, skillful engineering, and history of the automobil.

Wodapalooza (WZA) began as a grassroots single-day fitness competition with 145 athletes and 500 spectators in 2012 and has since established itself as the world’s premier Functional Fitness Festival. Wodapalooza descends on Miami’s Bayfront Park for 4-days in January and brings together thousands of athletes, spectators, and fitness fanatics to celebrate fitness, community, and life.
Check tickets

OtakuFest is a three-day festival that celebrates the best in Geek/Nerd culture including Anime, Animation, Cosplay, Gaming, Comics, Music, and more. Join us at the Miami Airport Convention Center January 13-15, 2023, for a celebration of fun events, exciting panels, and geek culture.

Regularly ranked as one of the best film festivals in the world, the Miami Jewish Film Festival (MJFF) is proud to announce the program for its upcoming 26th edition, which will be a hybrid of virtual and live programming events with 105 films in selection. Running from January 12-26, 2023, the festival will screen 88 feature and 17 short films representing 25 countries, including 9 world premieres, 12 international premieres, 12 North American premieres, and 4 US premieres.

Miami’s longest-running juried art festival will be held on January 14-15, 2023 on the beautiful University of Miami campus. The festival will feature over 150 fine art exhibitors, a children’s art tent, marketplace, a beer garden, food and live entertainment. This free outdoor community event is ideal for all art enthusiasts, offering artwork in a variety of media and price ranges. Expect live music, food vendors and art experiences.

The U.S. Open Sailing Series is an Olympic Class regatta held by West Marine and U.S. Sailing at Regatta Park in Coconut Grove, the center of Miami’s sailing community.

The International Chocolate Festival returns to Fairchild Tropical Botanic Garden in Coral Gables. Chocoholics from all over flock to this beloved event. They not only love the tasting stations but also getting to know the process behind making and growing cacao. Taste your way through chocolate confections, decadent desserts and savory bites. Enjoy entertainment, activities, classes and demonstrations. Indulge in chocolate pairings with wine and spirits that will unlock flavors and delight your palate. Bring your family and friends to explore and discover one delicious chocolate adventure after another!

The Original Miami Beach Antique Show is one of the country’s most revered shows of its kind. Taking place at the Miami Beach Convention Center in South Beach, the four-day-long event will feature more than 650 vendors and a packed schedule to enhance the experience.

The Ibero American Film Festival Miami, which will take place January 24 – 29, 2023, in Miami, Florida, announced the films selected for the fifth edition of the festival. The 2023 Festival will feature fifty, independent films selected amongst hundreds of submissions.

The million-dollar horse race ($3 million, to be exact) returns to Gulfstream Park this January. Launched in 2017 as part of 1/ST’s mission to modernize the sport of Thoroughbred horse racing, the Pegasus World Cup has become a premier event on the racing and Miami social calendars.  Come for the atmosphere, which borders on South Beach nightclub thanks to a day party and live musical performances. This year’s post-race A-list performances by Kygo and OneRepublic. Groot Hospitality restaurants Komodo, Papi Steak, Key Club and Gekkō will serve Carousel Club guests.
Check tickets

As the city gears up for the most wonderful time of the year with the recent announcement of Urbanspace’s famed holiday market setting up shop on the Lincoln Road District starting November 15th, the New York-based brand and its Miami partners at INHOUSE Commercial are excited to reveal a preliminary list of popular national and local vendors who will participate with festive gifts and goodies in the market, which runs until February 15th.

As one of the biggest endurance events of the year, the Life Time Miami Marathon & Half will return on January 29, 2023 for its 21st edition. More than 25,000 people from all 50 states and more than 80 countries around the world will compete in both the 26.2-mile marathon and 13.1-mile half marathon that snakes through the city. With such a gorgeous racecourse, it’s easy to see why the Miami Marathon and Half Marathon has emerged as a top destination race for international runners.

Magic Mike Live is an unforgettably fun night of sizzling, 360-degree entertainment based on the hit movies. Brought to you by the team behind hit films Magic Mike and Magic Mike XXL—including star Channing Tatum, director Steven Soderbergh and others—the 360-degree, immersive experience weaves together hot dance performances, acrobatics, live music and cocktails, which you’ll want on deck as things heat up throughout the 90-minute production. Miami’s six-month run of the touring production takes place at Miami Marine Stadium, where they’ve built a souped-up venue complete with a lounge serving food and drink options pre- and post-show.

From marquee NBA matchups to music’s hottest performers, downtown Miami’s premier venue, FTX Arena (formerly American Airlines Arena), is the place to be for a night of entertainment. No matter the occasion. Get FTX Arena tickets, so you can experience it live. You have quite a few to choose from this month with Eros Ramazzotti, and more.

Check out all upcoming events at Seminole Hard Rock Hollywood. Primed as the epicenter of South Florida entertainment, the new venue hosts state-of-the art technical capabilities that supports A-list celebrity performances as well as award shows. You have quite a few to choose from this month with Metallica, Adam Sandler, and more.
Get Tickets

Winter is a great time to catch one of our professional sports teams in action! The Miami Dolphins are heading towards the end of football season. Miami Heat basketball is underway, and Florida Panthers hockey seasons. Make sure to add a Miami Game Day to your Miami vacation – it’s an absolute MUST in Miami!

See the Miami Heat play live at the FTX Arena. If you’ve attended a Miami Heat game before, you know the excitement and energy of the crowd makes for a truly unforgettable experience. Get Miami Heat tickets, so you can experience it live.

If you’ve attended a Miami Dolphins game before, you know the excitement and energy of the crowd makes for a truly unforgettable experience. With Miami Dolphins tickets from Vivid Seats, you can experience it live.

Anywhere you go in Miami, arrive in style with Alto! Use code THEMIAMIGUIDE to enjoy $20 off your first 2 Alto rides!

What event are you most excited about? We will be updating this list leading up to end of month, so make sure to bookmark the page, check back often and let us know if you would like to be included!