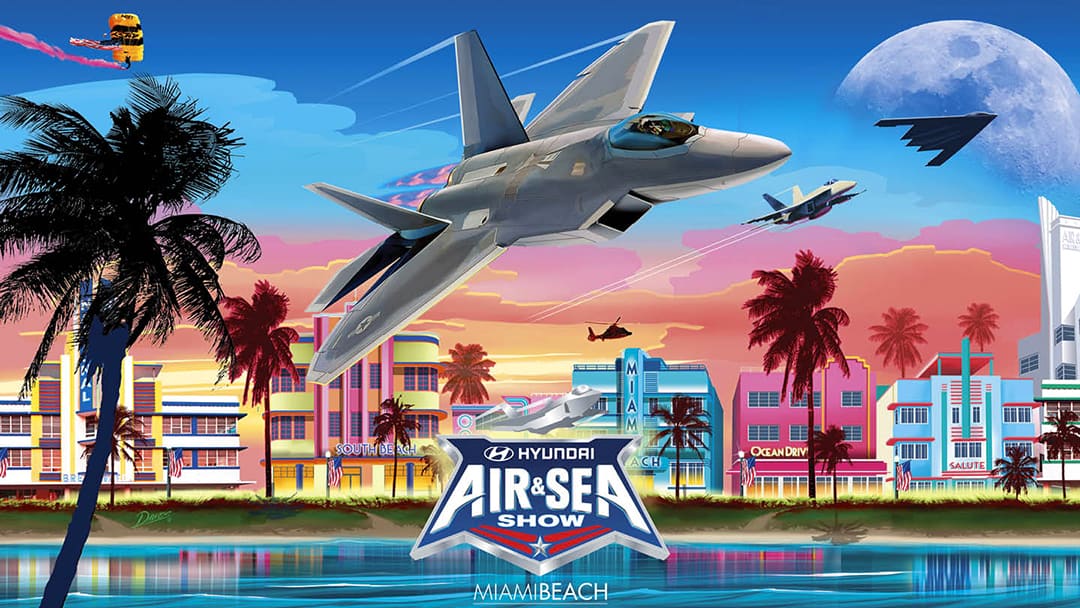 The skies over South Beach will once again roar with the thunder of America’s military might, as the Hyundai Air & Sea Show returns to Miami Beach this Memorial Day weekend (May 28-29, 2022). F16s, B52s and a dozen other jets will fly over the beach May 28 and 29, accompanied by parachute teams, special ops demonstrations, and Jet Skis and Cigarette boats speeding over the water. The festival is a tribute to those who gave their lives in defense of our country and offers an impressive display of aeronautical innovation for the whole family.

Tickets are currently on sale and internationally known rock band 3 Doors Down will headline the Music Explosion concert that immediately follows.

There’s no better way to spend Memorial Day weekend than under the sun at the Hyundai Air and Sea Show – now is your chance to win tickets!

ONE Lucky winner will win a family pack of 4 tickets to the Hyundai Air & Sea Show on Memorial Day weekend in Miami Beach. Enter our Giveaway!

The Hyundai Air & Sea Show begins each day at 11 am; starting with the sea portion, demonstrations by professional jet skiers, ThunderCats boat races, and the Cigarette Powerboat Racing Demonstration which will showcase 10 state-of-the-art Cigarette boats. Moving from the sea to the sky, attendees can then witness parachute teams, jet demonstrations, search and rescue exercises, and much more featuring our country’s advanced military technology.

There will be a Monster Energy FMX Motocross Exhibition as well, which can be found at the Display Village in Lummus Park along with military recruiting exhibits.

Taking the stage on Saturday, May 28th at 8 pm, 3 Doors Down will perform at Show Center on the beach. The U.S. Army’s As You Were band and the U.S. Airforce’s Max Impact band will kick off the Music Explosion at 5:30 pm. Following the concert, the Army Golden Knights Parachute Team will put on a fireworks extravaganza.

“There is no better time than Memorial Day weekend to pay tribute to our military, First Responders, and those that have paid the ultimate sacrifice on behalf of our freedom,” tells Mickey Markoff, National Salute to America’s Heroes Executive Producer to the Miami Guide.