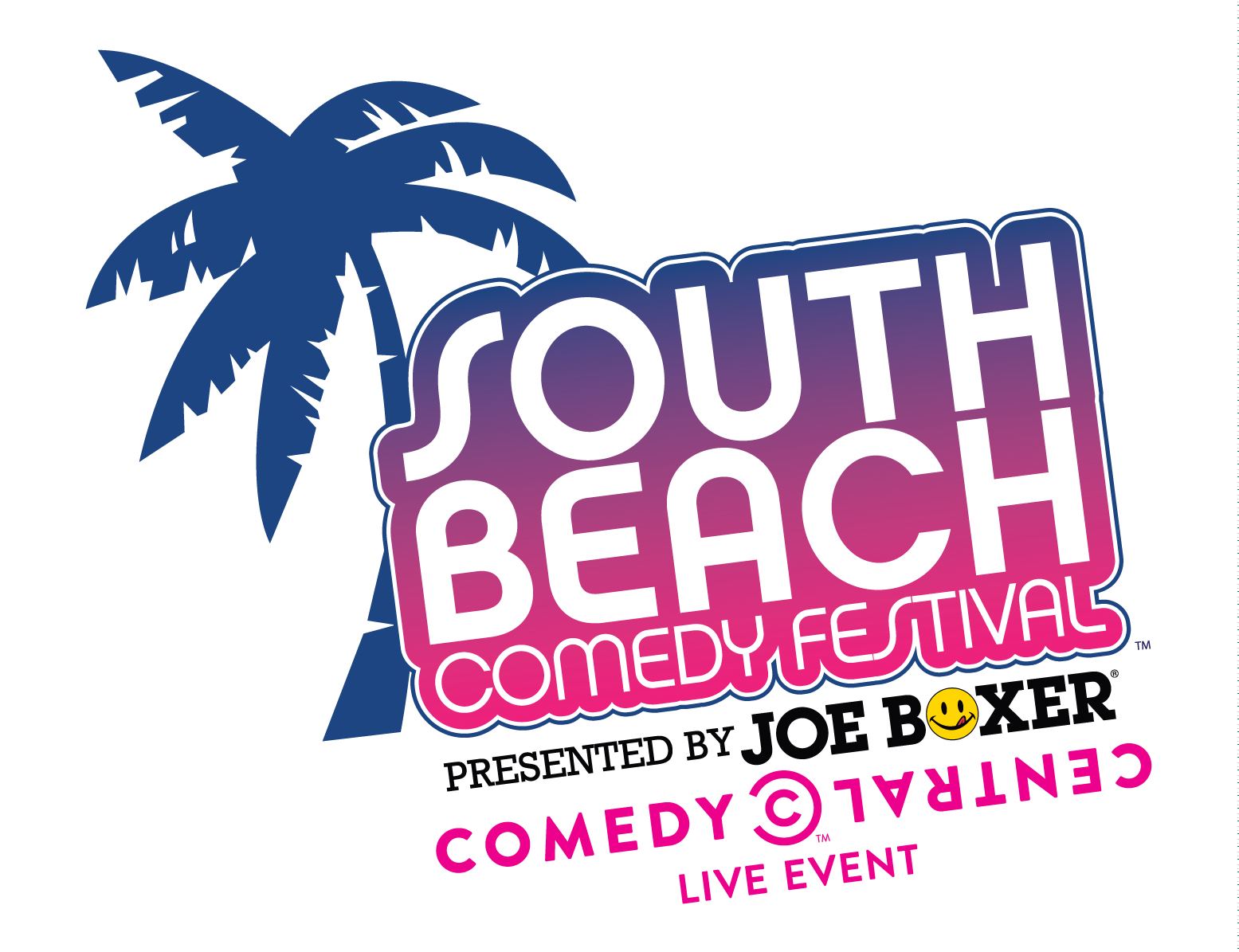 South Beach Comedy Festival returns to Miami Beach Wednesday, February 29th to Saturday, March 3rd, for another laugh-filled extravaganza featuring some of the world’s funniest entertainers. Now in its seventh year, the South Beach Comedy Festival, presented by Joe Boxer, continues to grow and remains the premiere comedy festival for top comedic talent and fans across the country.  This year’s event features Lewis Black, Donald Glover, Aziz Ansari, Jeff Ross and much, much more. Tickets go on sale Friday, February 3rd at 10AM through www.southbeachcomedyfestival.com, www.livenation.com, the Fillmore Box Office, all TicketMaster outlets or charge-by-phone: 1-800-745-3000.

Live Nation is proud to announce two new sponsors to the festival in 2012, including presenting sponsor Joe Boxer, best known for its irreverent marketing and identifiable product designs, and Slacker Radio, as the official personal radio service of the festival.

Once again the Festival will utilize multiple locations to highlight its exciting variety of talent. Acts will perform at the Fillmore Miami Beach at the Jackie Gleason Theatre, 1700 Washington Avenue; Colony Theater, 1040 Lincoln Road; and the unique Backstage at the Fillmore. The Lincoln Road Stage at Euclid Avenue will also serve as the home to the Festival’s outdoor, nightly, free comedy stage every evening from Thursday through Saturday at 9PM.

The Festival begins on Wednesday, February 29th featuring the World premiere of Will Ferrell’s latest movie, Casa De Mi Padre at the Colony Theatre. Scheming on a way to save their father’s ranch, the Alvarez brothers (Will Ferrell and Diego Luna) find themselves in a war with Mexico’s most feared drug lord (Gael García Bernal). The movie is billed as “from the same Gringos that brought you Anchorman!” This is the first public showing anywhere of the film and admission is by invitation only.

Lewis Black performs Thursday, March 1st, 8PM at the Fillmore Miami Beach. There isn’t any famous person in the world, in or out of politics, who Lewis has not skewered with his rapier wit and fast-paced rantings. Audiences can expect “America’s Foremost Commentator on Everything” to share his opinion on anything and keep them in stitches at the same time. Lewis is one of the most prolific and popular performers working today. He executes a brilliant trifecta as stand-up comedian, actor and author. Receiving critical acclaim, he performs over 200 nights a year to sold out audiences throughout Europe, New Zealand, Canada and The United States. He is one of few performers to sell out multiple, renowned theatres, including Carnegie Hall, Lincoln Center, Brooks Atkinson Theatre, New York City Center and the MGM Grand in Las Vegas. Lewis’ live performances provide a cathartic release of anger and disillusionment for his audience. Lewis yells so they don’t have to. A passionate performer who is more pissed-off optimist than mean-spirited curmudgeon, Lewis is the rare comic who can cause an audience to laugh themselves into incontinence while making compelling points about the absurdity of our world. Tickets are $39.50, $49.50 and $75.00 in advance with a $5.00 per ticket increase on day of show.

Shaq’s All-Star Comedy Jam takes center court at the Fillmore on Friday, March 2nd, 8PM. He may have retired from the NBA, but Shaquille O’Neal is still working…hard! Through his company Shaq Entertainment, he has launched the All-Star Comedy Jam tours. “I played with many All-Stars on the court and laughed with these All-Stars off the court,” said Shaq. “I’m happy to present this hand-picked lineup as the Shaq All-Star tour.” The show brings together many of the hilarious comedians presented at Shaq’s All-Star Comedy Jams shot during NBA All-star Weekends over the last three years. The March 2nd lineup includes All-Star comedians Bill Bellamy, Capone, Gary Owen, Corey Halcomb, and DJ Spinderella. Tickets are $39.50.

Appearing Friday March 2nd, 8PM at the Colony Theatre are the comedy duo Key & Peele. These fresh, relevant comedic actor-writers, used to being on the outside looking in, examine life in a provocative and irreverent way, through a combination of sketches. Whether it’s satirizing the President, spoofing Nazis, or ordering up some soul food, Key & Peele showcase their chemistry, camaraderie and unique point of view, born from their shared background and experiences growing up biracial in a not quite post-racial world. Keegan-Michael Key and Jordan Peele are debuting their original sketch-comedy show on Comedy Central on January 31st. Tickets are $25.50.

Donald Glover performs Saturday, March 3rd, 7PM at the Fillmore Miami Beach. Donald Glover is the consummate example of the Hollywood triple-threat. The 28-year old actor, writer, and musician is quickly positioning himself as one of Hollywood’s most promising talents. He is most recognized for his role as the jock “Troy” on NBC’s Community, but in addition, he continues to tour and perform stand-up. His one-hour stand-Up special “Wierdo” aired in November 2011 on Comedy Central. In July 2010, Donald received the first-ever Rising Comedy Star of the Year Award at the Just For Laughs Comedy Festival in Montreal. In addition to acting, Donald raps under the moniker “Childish Gambino”. Donald’s single “Freaks and Geeks,” is featured in the new Dwight Howard Adidas campaign, and he has recently wrapped his sold out I AM DONALD TOUR, a unique hybrid between music and comedy. Donald recently completed his first full length album, Camp, which was released on Glassnote records. The album sold over 50,000 copies in its first week of release. Tickets are $32.50.

Late night, 10PM, on Saturday, March 3rd Aziz Ansari takes over the Fillmore stage. Aziz Ansari has quickly established his presence in the comedy world. He began performing standup in 2001 while attending NYU and continues to perform at venues all over the world today. He is currently starring in a popular television series, has a number of films on deck and debuted his first hour-long standup special and album. The Hollywood Reporter said that he “has become one of the most prolific writers and performers on the comedy scene in recent years” and Rolling Stone recently placed him on the cover of their special comedy issue labeling him “the funniest man under 30.” In addition, Paste Magazine has named him one of the “Top 10 Comedians of the Decade.”  Aziz recently wrapped up a major multi-city standup tour called the “Dangerously Delicious Tour” and will soon release this as another hour long standup special. Tickets are $45.00, $37.50, and $35.00.

There will also be three exciting performers at the intimate Backstage at the Fillmore venue each doing two shows Thursday and Friday at 8 and 10PM and Saturday at 7 and 9PM.

First on Thursday March 1st Amy Schumer, one of the fastest rising comics on the scene, takes the stage. Amy’s Comedy Central Presents Half Hour comedy special premiered in April and was one of the highest rated specials in recent years. She was a guest on The Ellen Degeneres Show, where Ellen was quoted as saying “Amy is one of my favorites; I expect to see big things from this girl”. Tickets are $24.50.

Then on Friday, March 2nd for two shows at 8 & 10PM it’s Rob Delaney’s turn to entertain. Rob performs stand up regularly at the top comedy venues in Los Angeles, New York, and various comedy clubs across the United States. On Twitter, Rob has created a following of nearly 230,000 followers that grows every day. He’s been listed on “The Funniest People on Twitter” on such sites as the Huffington Post, Vice Magazine, Paste Magazine, Comedy Central, and Funny or Die. Tickets are $22.50.

Finally, Hannibal Buress performs on Saturday, March 3rd. Cool, confident and intelligent, comedian Hannibal Buress has the well-earned respect of his peers, who regard him as one of the brightest young talents to emerge from the city of Chicago.  A natural storyteller who can captivate a room with his words alone, Hannibal generates huge laughs with the laidback, quirky observations that have become his trademark style. From his stories about his experiences with dating older women, the merits of Courier New font, and his not-so-secret desire to kick pigeons, Hannibal never fails to entertain. Tickets are $20.00.

Tickets for these shows go on sale Friday, February 3rd at www.southbeachcomedyfestival.com, www.livenation.com, the Fillmore Miami Beach Box Office, all TicketMaster outlets or charge by phone: 1-800-745-3000. All dates, acts and ticket prices are subject to change without notice. All tickets are subject to applicable taxes, parking and service and handling charges.