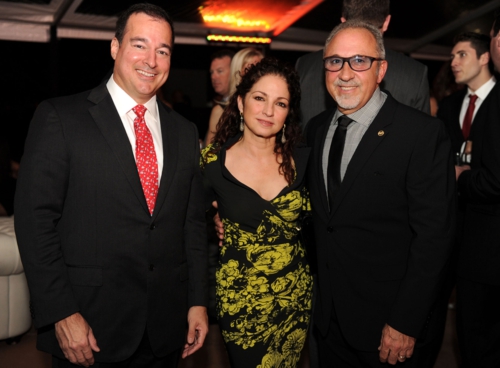 On Saturday, January 28, Robert Furniss-Roe , Regional President of Bacardi North America, along with Facundo L. Bacardi , Chairman of Bacardi Limited and great-great grandson of Company founder Don Facundo Bacardi Masso, welcomed 150 of Miami‘s most elite tastemakers, Bacardi family members and current and retired Bacardi employees to an ultra-exclusive private party as part of the world-wide celebrations of the 150th anniversary of BACARDI® rum.

“The BACARDI 150th anniversary is a celebration, but it is much more than that. It’s a chance for Bacardi, the company, the family and the brand to sincerely thank the billions of customers and consumers who have helped take us from a humble distillery in Santiago de Cuba into one of the top three spirits companies in the world,” said Robert Furniss-Roe, Bacardi North America Regional President.

A towering wall of authentic rum barrels that were used in the actual making of BACARDI rum were shipped in from the Bacardi distillery in Puerto Rico created an entry point to the outdoor venue on Biscayne Boulevard. Upon arrival, guests were immediately engaged in an impressive display that showcased the evolution of the iconic BACARDI bat logo. A diamond shaped bar sat center stage, inviting party-goers to sample a wide range of cocktails featuring a variety of iconic Bacardi spirits.

Mid-evening, Robert Furniss-Roe and Facundo L. Bacardi joined BACARDI Maestros de Ron (Master Blenders) and guests to sample some of the most unique blends of rum in a one-of-a-kind tasting room filled with historic artifacts encompassing the 150 years of the Company and internationally recognized brand. A montage of iconic BACARDI vintage advertisements from the 1900s adorned the walls and a replica of the original alembic still used in the distilling process was displayed.

Outside, celebrity guests mingled with Bacardi executives while enjoying signature drinks, such as the Authentic BACARDI Mojito and the Original BACARDI Cuba Libre, the world’s favorite cocktail with 6 million served every day. The cocktails were complemented by butlered hors d’oeuvres that included mini tenderloins of beef and medallions of grilled lobster.

The evening celebrated 150 years since Don Facundo Bacardi Masso founded Bacardi in Santiago de Cuba on February 4, 1862 and revolutionized the spirits industry by creating the first smooth, light-bodied rum. The BACARDI rum formula, a family secret since its creation, is still closely guarded and known only to a few select family members and Master Blenders.

The ability to overcome and persevere where other companies failed has shaped the iconic global brands’ remarkable heritage and evolution. As a company, Bacardi faced U.S. prohibition, illegal confiscation of its Cuban assets, exile during the Cuban Revolution and financial distress. Today, Bacardi sells in more than 150 countries and is the largest privately-held spirits company in the world. While the BACARDI Bat Device has evolved over the past 150 years, it remains a symbol of good health, fortune and family unity.