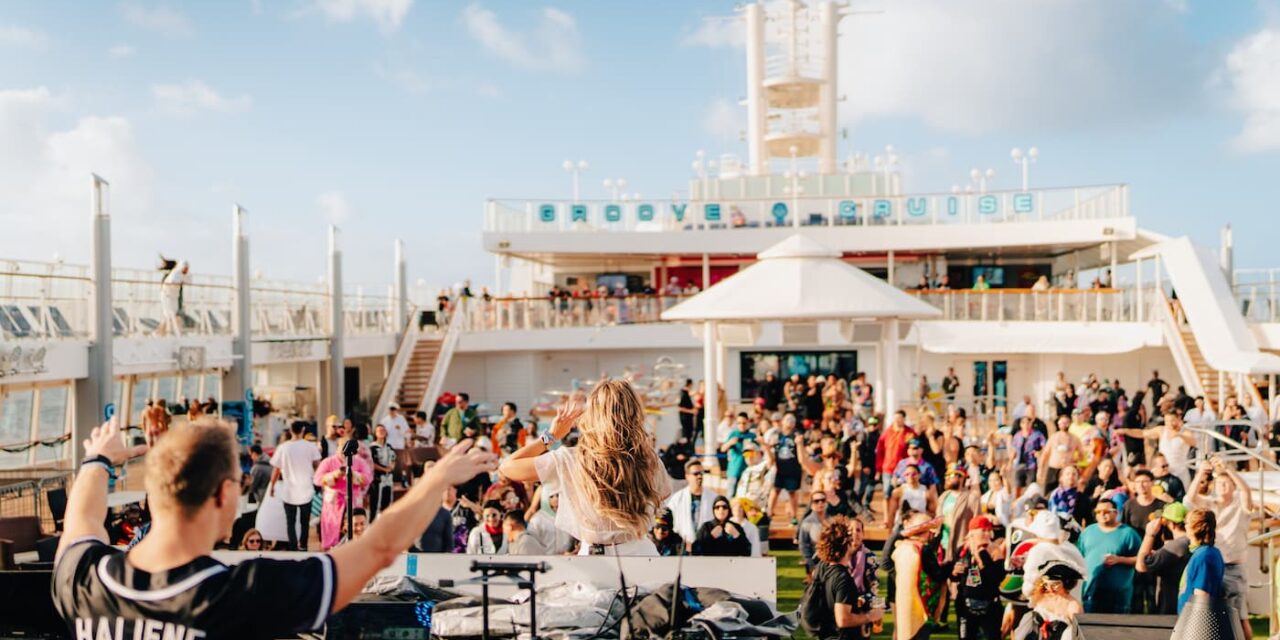 If you’re a fan of electronic music and you haven’t heard of Groove Cruise, you’re missing out. This annual floating dance music festival, which has been taking place for nearly two decades, is a one-of-a-kind experience that has attracted a devoted following of attendees, many of whom have been returning year after year.

One of the things that sets Groove Cruise apart from other music festivals is the tight-knit community that has developed among its attendees. Many of these veterans have been on multiple sailings, and over the years they’ve formed deep connections with one another. Some have even met their significant others or long-term friend groups on the cruise, and a few have even gotten engaged or married onboard. 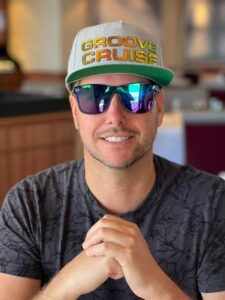 “The #GCFAM means more to me than words could possibly convey; lifelong meaningful relationships from around the world. It’s unlike anything I have ever seen or any community I have ever been a part of. Everything we do at Whet Travel is for our Captains, aka GCFam, and to see them come back sailing after sailing keeps us going and affirms all the hard work we put in listening to their ideas and everyone’s surveys and comments, innovating, and always evolving Groove Cruise to create deeper and more meaningful connections. Groove Cruise belongs to the captains and I am so grateful to be a part of the most loving, giving and outrageous community on the planet.” – Jason Beukema (founder of Groove Cruise)

These veterans have all sorts of stories to tell about the incredible traditions and special moments they’ve experienced on Groove Cruise over the years. Take Chelsea Zitnay, for example. She went to her first GC in 2013 solo, and after 16 consecutive sailings, she now looks forward to meeting up with all the other GC veterans she’s met over the years. 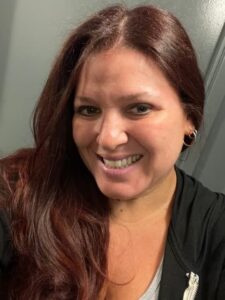 “Groove Cruise is unique in that it is the total package festival experience – everything is rolled into one and handled
so you don’t have to worry about a damn thing once you’re onboard!  However, that experience is also magnified and on steroids because no other festival in the world operates with programming non-stop for the entirety of the event and only when the music finally stops, it’s because you’re back in port after 72, 96, or 120 hours and they’re telling you “SURPRISE! We’re Baaaack! Time to Go! Get off the Ship!

Groove Cruise is also a bit of an enigma because it’s really quite impossible to explain what a Groove Cruise is like to someone who has never been on one. Every new Groove Cruise has the opportunity to be entirely different from the last – and that’s what makes it so exciting!” – Chelsea Zitnay (who has attended every Groove Cruise edition since January 2013 – Miami 2023 will mark her 17th consecutive sailing)

Or there’s the couple of Suzie and Chris Carey, who have been on 15 sailings since 2011. As a couple in their 50s, they love going on Groove Cruise Miami every year because it’s the only electronic music festival they feel they can attend without being judged for their age.

“We love being surrounded by like-minded professionals that “leave the world behind” and are allowed to be their authentic selves without fear of judgement. We love to dress up and act silly with people we know and don’t know. Nothing compares to walking down the hallways and being invited into a room for a stateroom party or an elevator party. We even have a song for it called “Elevator Party”. Nowhere else on the planet can 50-year-olds act this way and not be looked down upon. We love that our stateroom is so close so we can take a break, change an accessory, change an uncomfortable outfit, take a nap, or anything we want, just steps away from the party where there are no lines to get in and no re-entry fee. I think at the end of the day, the greatest thing about Groove Cruise is our GCFAM. The people we have met throughout the years have become not just our friends but our family. We travel the world with them, and spend special moments and holidays with them. The bonds that we have made, will never be broken. #GCFAM4LIFE” – Suzie and Chris Carey (known as The Crushers – they have been on 15 sailings since 2011 and run an 80’s themed bootcamp known as Crusher Camp)

Rochelle and Daniel fell in love and got engaged on the Groove Cruise ’22 Cabo sailing. They’re frequent attendees and have matching GC tattoos. Groove Cruise has not only brought them together but also gave them a new family. 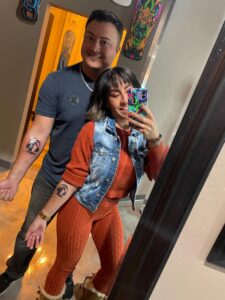 “Groove cruise will forever hold a special place in our hearts. Daniel and I will be forever grateful for what Groove Cruise and the legend Jason has provided for us. We love GC so much that we even got matching GC logo tattoos. Groove Cruise has not only found our love for each other but so many other things. We meet friends that became our family and we couldn’t have asked for a better “chosen family”. From finding love, finding new family, and making endless memories and dreams come true. Can’t wait for GCMIA 2024. Who knows you might even see us have our wedding…..” – Rochelle and Daniel (she has attended 10 GC and he has attended 8)

One of my personal favorites is the story of Daniel and Shelley, a long-time couple with matching GC tattoos. They met on Groove Cruise in 2015 and became engaged on the most recent sailing to Cabo this year, with the help of other Groove Cruise veterans who Daniel had notified before the event. The proposal was able to happen in the same place that bonded them together.

And let’s not forget the Groove Cruise resident DJs, such as Doc Brown, who won an online Groove Cruise DJ competition in 2010 and has since become a 15-time DJ resident with GC. He’s even started his own label and throws his own label-branded parties both on-and-off board.

“On a normal festival as an artist you get driven in a back door and you hang with other artists. You go on stage, play, and leave.  On the Groove Cruise, you get to know the fans.  You see them all over the ship and party with them.  It’s just much more fun for me because I’m just like them.  I’m a fan.  I get to experience the party just like they do.  I think that’s why the experience is so good on GC because all of us are experiencing it also and we want to make it amazing.” – Scooter from Scooter & Lavelle (they were the first resident DJs on Groove Cruise and have attended over 30 editions) 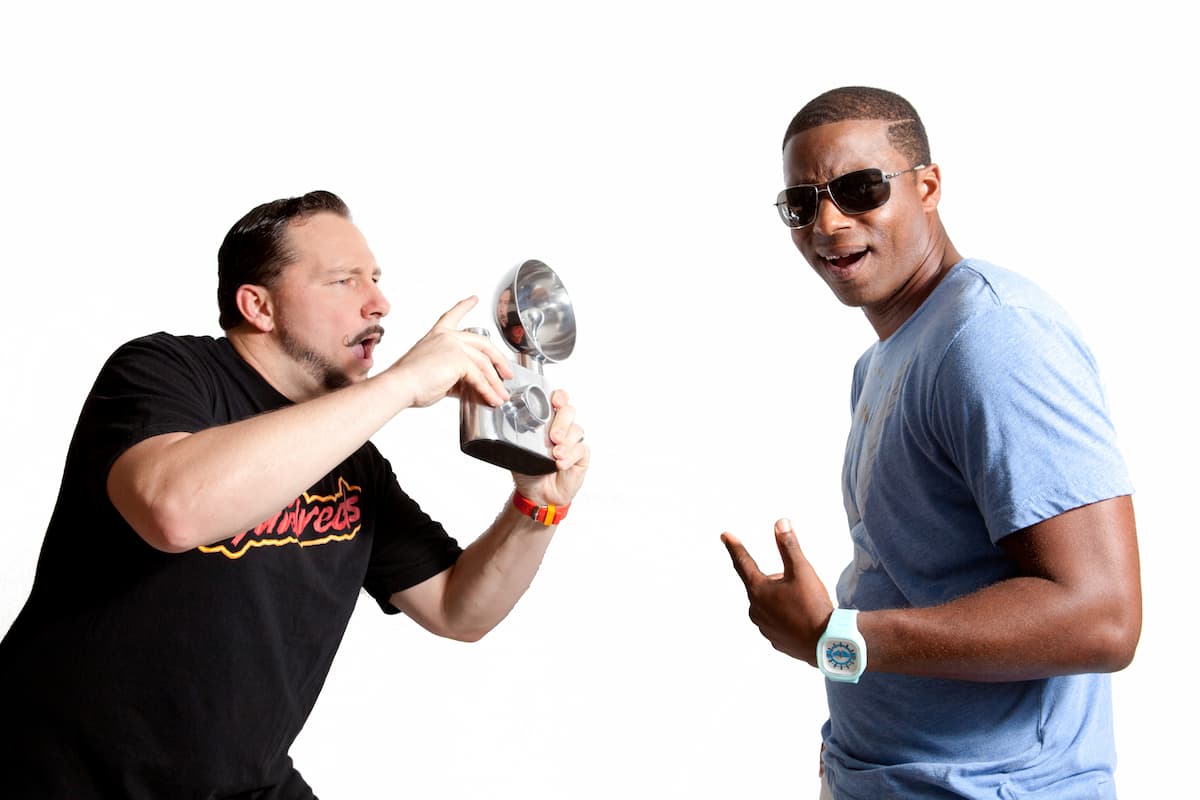 So, why do these veterans keep coming back year after year? The answer is simple: Groove Cruise has become more than just a music festival for them. It’s a community and a tradition that they look forward to every year. The memories and connections they’ve made over the years keep them coming back for more, and the unique atmosphere of the event continues to provide them with an unforgettable experience each time. Whether it’s the friendships they’ve formed, the love stories they’ve witnessed, or the amazing performances they’ve seen, Groove Cruise holds a special place in the hearts of its veterans, and they wouldn’t miss it for the world.

ABOUT GROOVE CRUISE
Known as the world’s premier floating dance music festival, Groove Cruise has made a lasting impact in the dance music space since its inception in 2004. Produced by Whet Travel, Groove Cruise is the only independent music cruise to sail from both the East and West coasts of the United States. The carefully crafted programming provides a unique experience for attendees which has grown into a devout fanbase throughout the past 18 years. Running throughout the entire duration of the cruise, Groove Cruise features 24/7 electronic dance music with world-class production, exotic destination experiences as well as cruise amenities and artist-involved activities.