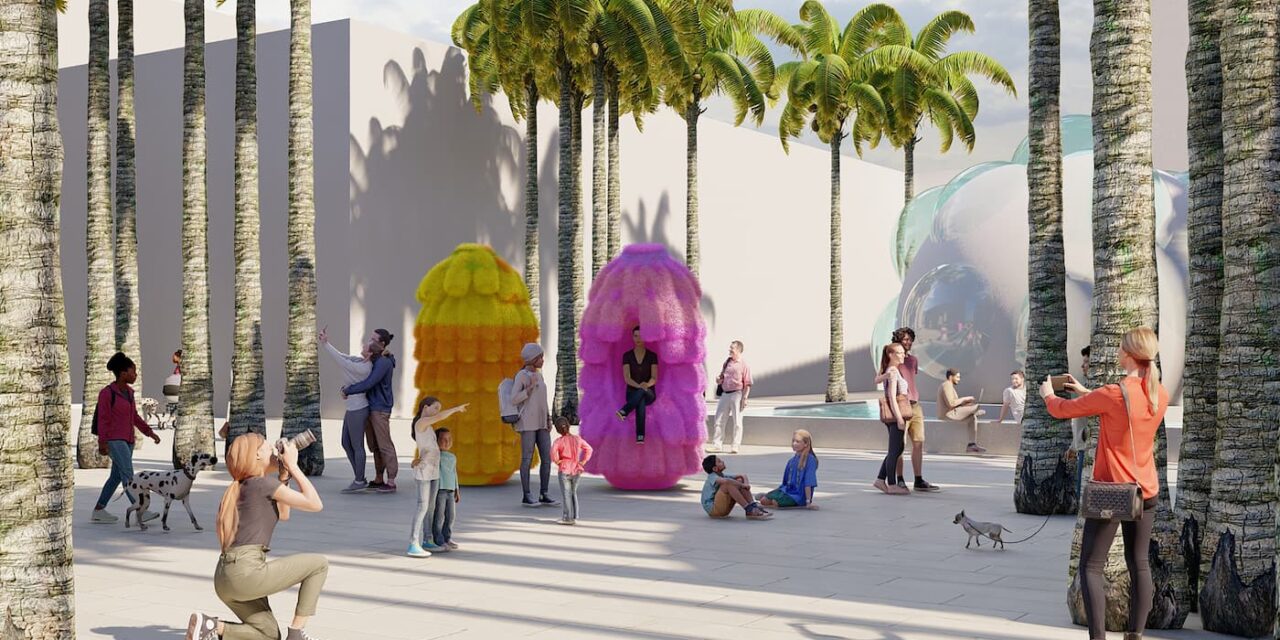 The curatorial brief for the year, Something to Talk About, called for neighborhood-wide site-specific design interventions that spotlight Miami-centric stories while also enlivening visitors’ experience of the Miami Design District during its busiest season. In response, Barnes conceived Rock | Roll as a multifaceted, multi-scale installation that draws on the vibrant visual language of Miami Carnival to honor the BIPOC communities that have substantially contributed to Miami’s one-of-a-kind, polyethnic culture, from the city’s earliest foundations to today.

For the neighborhood’s central pedestrian corridors, Barnes designed a series of whimsical, larger-than-life seating capsules that rock back-and-forth when activated by users and feature colorful, shaggy surfaces reminiscent of Carnival’s hallmark feathered costumes. With a nod to steel drums and the infectious joy of Soca music, Barnes has also designed brightly hued wind chimes, hundreds of which will be hung like melody-making ornaments in the lush native trees and palms planted throughout the neighborhood.

Fabricated by ALT BLD, Rock | Roll includes an architectural-scale, free-floating dome that recalls a giant disco ball in both form and function. Suspended far overhead and animated by light and sound, the shiny, faceted structure will serve as a programmatic marker to an outdoor gathering space dedicated to sharing and enjoying community-driven storytelling. For the duration of the Rock | Roll installation, the space will host Carnival-inspired playlists as well as a talks series developed in collaboration with University of Miami’s Center for Global Black Studies and the Institute of Contemporary Art, Miami. Program to be announced.

Barnes notes: “I saw this project as an opportunity to celebrate the unique character of the city that has become my adopted home and the subject of much of my most prominent research. Rock | Roll is an ode to the joyful spirit that persists in Miami’s Black communities—a spirit of self-care that is so perfectly embodied in Miami Carnival culture. This city would not be what it is today without significant contributions from people who, on the one hand, look like me, and on the other reflect deep ties to places beyond Miami, especially the Caribbean and Latin America. The moral to the story is that there is space for everyone here.”

“We are proud to welcome Germane Barnes’ Rock|Roll to the neighborhood and spotlight this tremendous Miami talent making international waves,” says Craig Robins, President and CEO of Dacra. “Each year, our Annual Neighborhood Commission invites creative visionaries to harness the power of art, design, and culture to provide original, engaging experiences for all our guests. The imaginative, local focus of this year’s site-specific installation is going to be a lot of fun.”

According to curators Anava Projects, “One of the things we admire most about Germane and his practice—and there are many—is his community-engaged approach, which exemplifies the most exciting directions in the field at this moment. His work is at once accessible and poetic, critical and uplifting. We’re thrilled to be collaborating with him.”

The first Miami-based talent to be selected for the Miami Design District Neighborhood Commission since its launch in 2015, Barnes is a Chicago-born, University of Illinois- and Woodbury University-trained architect regarded for his propositional practice dedicated to mining the ways that race and architecture entwine, implicitly and explicitly, historically and today. Barnes’ recent prestigious honors include the Rome Prize in Architecture, the Harvard Wheelwright Prize, the Architectural League Prize, and an inaugural grant from Theaster Gates and Prada’s Dorchester Industries Experimental Design Lab. In addition to running his independent eponymous studio, Barnes is an Assistant Professor and the Director of The Community Housing & Identity Lab (CHIL) at the University of Miami School of Architecture.