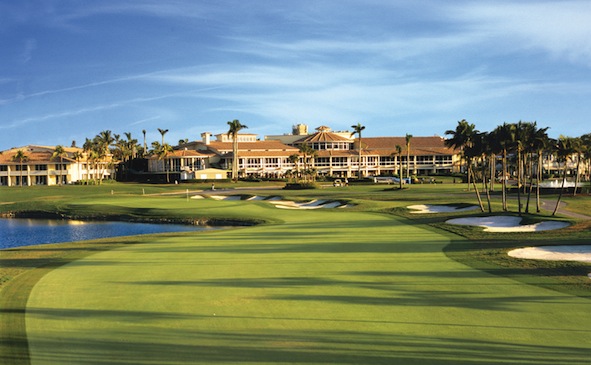 The Trump Organization today announced that it will purchase Miami’s iconic Doral Hotel & Country Club for $150 million. Doral is legendary for its four championship golf courses, including the world-renowned Blue Monster; 700-room resort; vast ballrooms and meeting facilities; sprawling Pritikin spa; and the highly regarded Golf School and teaching facilities. The Trump Organization plans to make a major investment in the resort and golf courses with the intention of restoring Doral to its former grandeur. The TRUMP HOTEL COLLECTION(TM), the wholly owned hotel management division of The Trump Organization, will take over the management of the property and expects to assume operations by June 2012. The property will remain fully operational throughout the renovation, which is expected to conclude in Fall 2013.

“When Doral first opened, it was considered the best resort in the world,” stated Donald J. Trump, chairman and president. “The combination of the property’s incredible location in the heart of Miami and our very significant investment in upgrading the resort will enable us to return Doral to its former glory if not surpass it. When completed, Doral will be the finest resort and golf club in the country.”

The Blue Monster, one of the most famous golf courses in the world, has been home to a PGA TOUR event every year since its opening, with the Doral Open from 1962 to 2006, and the highly regarded WGC (World Golf Championship) since 2007. The WGC invites only the world’s top 75 tour professionals; past winners include Tiger Woods, Phil Mickelson and Ernie Els.

“It would be impossible for a developer today to replicate a property of this size in Miami at any cost,” noted Trump.

“We realize the potential and are uniquely positioned to redevelop and operate Doral based on the breadth of our organization,” said Ivanka Trump, executive vice president of development and acquisitions, who is overseeing the purchase, redevelopment and repositioning along with her father. The TRUMP HOTEL COLLECTION operates seven award-winning, luxury hotel properties across the globe. The Trump Organization also owns and manages 10 golf courses of the highest caliber throughout North America, Europe and the Caribbean that receive numerous accolades year after year and are among the highest rankings in the industry. “Our ability to create value through the development process combined with the strength of our brand and our unsurpassed hotel and golf management capabilities make us the ideal owner of this iconic asset,” she continued.

The Trump Organization has retained world famous golf course architect Gil Hanse who will work directly with Donald J. Trump and the PGA TOUR leadership to enhance and renovate the Blue Monster.

“We look forward to working with Gil Hanse and, together with the PGA TOUR and players, have given him unlimited latitude to bring the Blue Monster to the highest standards and level of golf. When completed, coupled with the great Miami location, there will be nothing like it anywhere in golf,” stated Donald J. Trump.

Hanse added, “We are very excited to have the opportunity to renovate the Blue Monster Course at Doral. Few courses on Tour can claim such a long history and can span the generations of Tour players from Nicklaus and Palmer to Woods and Mickelson. We intend to focus on these traditions as we seek to update the course to meet the demands of modern day tournament conditions. We are also pleased to be matching our attention to detail in golf course design with The Trump Organization, with its similar passion for detail, as it seeks to revitalize the entire Doral resort.”

The planned multimillion-dollar renovation will dramatically reposition all aspects of the resort with luxurious hotel rooms and a greatly enhanced guest experience throughout the public spaces. Renovation of the main building, lodges, conference areas, spa and Champions Pavilion will set a new tone for the resort, while the Members’ Clubhouse will be redesigned to include vastly upgraded facilities and amenities. All four golf courses will be enhanced, and the driving range will be lengthened and expanded to more than twice its current size, making it a world-class facility befitting of the resort.

Earlier this month, TRUMP HOTEL COLLECTION announced it had been selected by the U.S. General Services Administration as part of an exhaustive and competitive RFP process to be the developer of Washington, D.C.’s The Old Post Office, the most sought-after hotel development opportunity in the country. Trump International Hotel, The Old Post Office, Washington, D.C. is slated for a 2016 opening.