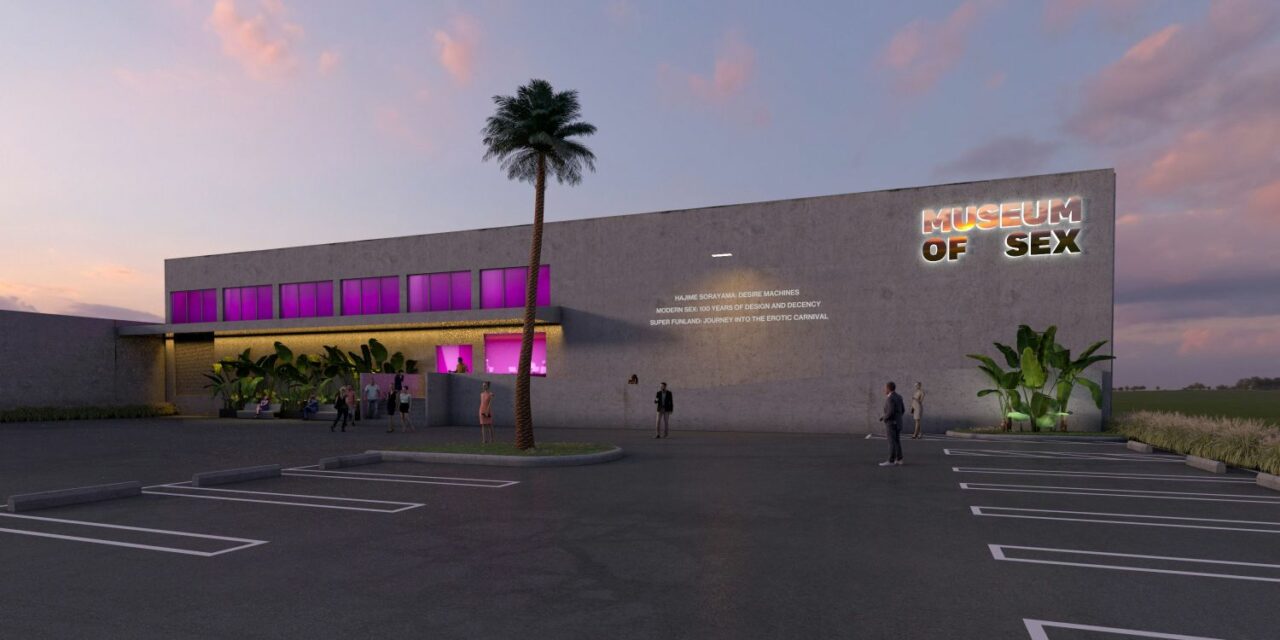 The Museum of Sex, whose flagship location opened its doors 20 years ago in NYC, announces its expansion to Miami in spring 2023. Housed in a 32,000-square-foot converted warehouse in the Allapattah district and designed in collaboration with international design studio Snøhetta, the museum will feature three large exhibition galleries, retail space, and a bar. The Miami location will mark the institution’s most ambitious undertaking yet, with the inaugural exhibition program to include Hajime Sorayama: Desire Machines; the historical survey Modern Sex: 100 Years of Design and Decency; as well as a significantly scaled up interpretation of Super Funland: Journey into the Erotic Carnival, the museum’s thrilling immersive experience.

Founded in 2002, the Museum of Sex has launched over 40 exhibitions committed to preserving, presenting, and celebrating the cultural significance of human sexuality. Its exhibitions and programs span genres that reflect the vibrant complexity of human sexuality, connecting the present with the past, and balancing the serious and the playful. The Museum of Sex is devoted to bringing the best of current scholarship to the widest possible audiences and is committed to encouraging public awareness, discourse, and engagement.

Daniel Gluck, Executive Director and Founder of Museum of Sex, commented, “We are excited to reach this major milestone in our history and to bring our vision to the vibrant cultural landscape of Miami. Our inaugural programming perfectly embodies our ambitions to be a thought-provoking forum around sex and sexuality, and to bring forth a unique, publicly loved, and critically acclaimed cultural offering to Miami.”

Hajime Sorayama: Desire Machines marks the Japanese artist and illustrator’s first major solo museum exhibition in the United States. Globally acclaimed for blurring the lines between realism and fantasy, flesh and metal, the human and non-human, Sorayama explores the beauty and eroticism of human bodies and machines through his signature hyperrealist aesthetic. The exhibition will feature four of Sorayama’s famous over 9 feet tall “sexy robot” sculptures, which have recently reached pop culture acclaim through partnerships with the likes of Dior and The Weeknd, a bronze “sexy robot walking” sculpture, as well as 20 never-before-seen simultaneously futuristic and nostalgic erotic paintings. Hajime Sorayama: Desire Machines is organized by Emily Shoyer, Curator at Large at the Museum of Sex, and Nanzuka Gallery in Tokyo.

Modern Sex: 100 Years of Design and Decency surveys the cultural and societal impact of restriction on the design, marketing, and distribution of sexual health products from the 1920s until today. The exhibition showcases how popular culture, discourse, packaging, and advertisements around sexual health have been debated, experimented with, and controlled for 100 years in an ongoing tension between design and decency. Co-curated in collaboration with Éva Goicochea, Founder of maude, a modern sexual wellness company; and Dakota Johnson, Co-Creative Director of maude and world-known actor, Modern Sex: 100 Years of Design and Decency pioneers a one-of-a-kind exhibition featuring over 500 artifacts, historical media, and medical objects such as the carefully-disguised art deco prophylactic envelopes of the 1920s, the coded cure-all vibrator of the 1950s, AIDS-fighting advertisements of the 1980s, and the simplified “sex essentials” of the 2010s.

Fueled by Miami’s vibrant arts community and unique position as a cultural epicenter, the Museum of Sex’s new outpost will offer Miami locals and visitors a destination unlike any other they have been offered before. Additional information and details about the opening will be available in the coming months.

About Museum of Sex
The Museum of Sex preserves and presents the history, evolution, and cultural significance of human sexuality. Since opening in 2002, the museum has collaborated with world-renowned cultural institutions, artists, and academics to create exhibitions and interactive programs that explore the best in current scholarship in the arts, sciences, and humanities. Recent exhibition highlights include Porno Chic to Sex Positivity, The Incomplete Araki: Sex, Life, and Death in the Works of Nobuyoshi Araki, and Leonor Fini: Theatre of Desire, 1930-1990, among others. From fine art to historical ephemera, its permanent collection is comprised of more than 20,000 sexually significant artifacts. For more information, please visit www.museumofsex.com.