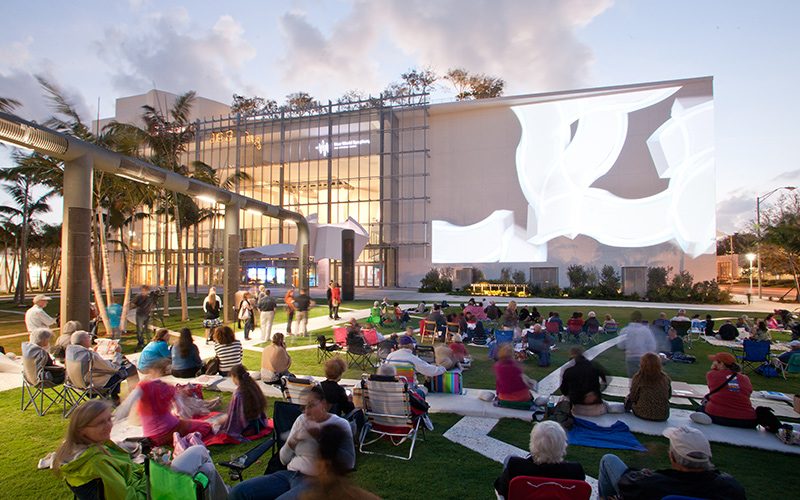 New World Symphony officially launches its 2022-23 season with the 35th Anniversary Season Opener concerts on Saturday, October 15th at 7:30PM and Sunday, October 16th at 2:00PM at the New World Center. The evening will feature conductor Christoph Koncz in his return to the NWS podium and Jeanine De Bique’s highly anticipated NWS debut. Saturday evening’s performance can be viewed in the Michael Tilson Thomas Performance Hall, as a WALLCAST® Concert with brand-new Mobile Wall in SoundScape Park, and streamed online at NWS.edu. Sunday’s performance is exclusive to the Michael Tilson Thomas Performance Hall.

In addition to the ticketed event in the Michael Tilson Thomas Performance Hall, audiences are also welcomed to experience Saturday night’s performance for free in SoundScape Park. The concert will be presented as a WALLCAST® Concert on the New World Center’s 7,000-square-foot projection wall with striking audio and video technology and on South Florida’s largest Mobile Wall in the Southeast corner of SoundScape Park. WALLCAST® Concert and Mobile Wall presentations welcome audiences of all ages. Space on the lawn is first come, first served and audience members are responsible for their own seating. Saturday’s performance can also be viewed online as a Webcast concert that will be streamed live on New World Symphony’s YouTube channel. Viewers can access the recording of the stream for free on YouTube for 30 days after the concert.

Mr. Koncz has also established himself internationally as a conductor. His debut at the 2013 Salzburg Mozartwoche was followed by concerts at such prestigious venues as the Berlin, Cologne and Munich Philharmonie, Vienna Konzerthaus and KKL Lucerne, as well as at the Salzburg Festival. In 2017 he made his U.S. conducting debut with the Memphis Symphony and conducted the Tonhalle-Orchester Zürich in a master class with David Zinman. He made his subscription debut at the Cologne Philharmonie with Concerto Köln in June 2018 and took the Orchestre Métropolitain de Montréal on tour in March 2019. At the Cartagena Music Festival 2020 he appeared as Artist-in-Residence in six concerts with the Camerata of the Royal Concertgebouw Orchestra. For two decades, he has enjoyed a very close relationship with the Verbier Festival, performing chamber music, leading the Verbier Festival Chamber Orchestra and conducting the VFCO on tours.

Mr. Koncz is in his second season as Chief Conductor of the Deutsche Kammerakademie Neuss am Rhein and will perform with the orchestra at the Concertgebouw Amsterdam (Mendelssohn, Beethoven). He has recently been appointed Principal Guest Conductor of the renowned French period instrument ensemble Les Musiciens du Louvre, with whom he has recorded the complete Mozart Violin Concertos on the composer’s own violin for the first time. The Strad magazine described his performance as “a masterly demonstration of melodic playing.”

Born 1987 in Konstanz into an Austrian-Hungarian family of musicians and raised in Vienna, Mr. Koncz received his first violin lesson at the age of four and entered the Vienna University of Music only two years later. At the age of just nine, he received worldwide acclaim for starring as child prodigy Kaspar Weiss in the Canadian feature film The Red Violin, which won an Academy Award for Best Original Score.

In 2008, at the age of 20, Mr. Koncz was appointed Principal Second Violin of the Vienna Philharmonic, a position he has held since. He plays the 1707 ex Brüstlein violin by Antonio Stradivari on generous loan by the National Bank of Austria.

Mirrors, her first solo-CD, with Concerto Köln, was released in 2021 by Berlin Classics. The album received much critical acclaim and garnered with the “Diapason D’or” découverte award for best debut album and Editor’s choice award from Gramophone.

Since her breakthrough debut at the 2017 Salzburg Festival as Annio in Peter Sellar’s production of La Clemenza di Tito, Ms. De Bique has appeared as Susanna in The Marriage of Figaro for San Francisco Opera, Helena in Ted Huffman’s production of A Midsummer Night’s Dream at Deutsche Oper Berlin, the title role of Handel’s Rodelinda at Opéra de Lille, as Donna Anna in Don Giovanni for Opéra National du Rhin and as Aida in the world premiere of Caruso a Cuba by Micha Hamel in a return to De Nationale Opera Amsterdam.

Ms. De Bique’s concert highlights include Brahms’ German Requiem with Raphaël Pichon at La Seine Musicale in Paris and with Lorin Maazel and the Munich Philharmonic; Mahler’s Symphony No. 2 with the Orchestre National du Capitole de Toulouse; Handel arias and Mozart’s Requiem with the Budapest Festival Orchestra and Iván Fischer at the Hollywood Bowl and New York’s Lincoln Center; Mahler’s Symphony No. 4 in Milan, St. Petersburg, Munich and Budapest; return visits to the BBC Proms in works by Handel with the Chineke! Orchestra and with the Scottish Chamber Orchestra and Richard Egarr; the Messiah with the Atlanta Symphony, Royal Liverpool Philharmonic and Melbourne Symphony; Pärt’s Como cierva sedienta with Iván Fischer and the Konzerthausorchester Berlin; and Mahler’s Symphony No. 8 with Lorin Maazel and the New York Philharmonic, as well as the Chicago Symphony with Marin Alsop at the Ravinia Festival.

Ms. De Bique holds a master’s degree from the Manhattan School of Music. Her awards include first prize at the Young Concert Artists, Inc Music Competition, Arleen Auger Prize at the Hertogenbosch International Vocal Competition and third prize in the Viotti International Music Competition. She was a prizewinner at the Gerda Lissner Vocal Competition (New York), a finalist and study grant award recipient of the 2011 Metropolitan Opera National Council Auditions and received a study grant from the Licia Albanese-Puccini Foundation. She is a recipient of the Youth Ambassador for Peace, awarded by the National Commission of UNESCO, Trinidad and Tobago.

ABOUT THE NEW WORLD SYMPHONY

The New World Symphony, America’s Orchestral Academy, prepares graduates of music programs for leadership roles in professional orchestras and ensembles. In the 35 years since its co-founding by Artistic Director Laurate Michael Tilson Thomas and Lin and Ted Arison, NWS has helped launch the careers of more than 1,200 alumni worldwide. A laboratory for the way music is taught, presented and experienced, the New World Symphony consists of young musicians who are granted fellowships lasting up to three years. The fellowship program offers in-depth exposure to traditional and modern repertoire, professional development training and personalized experiences working with leading guest conductors, soloists and visiting faculty. Relationships with these artists are extended through NWS’s extensive distance learning via the internet. NWS Fellows take advantage of the innovative performance facilities and state-of-the art practice and ensemble rooms of the Frank Gehry-designed New World Center, the campus of the New World Symphony.