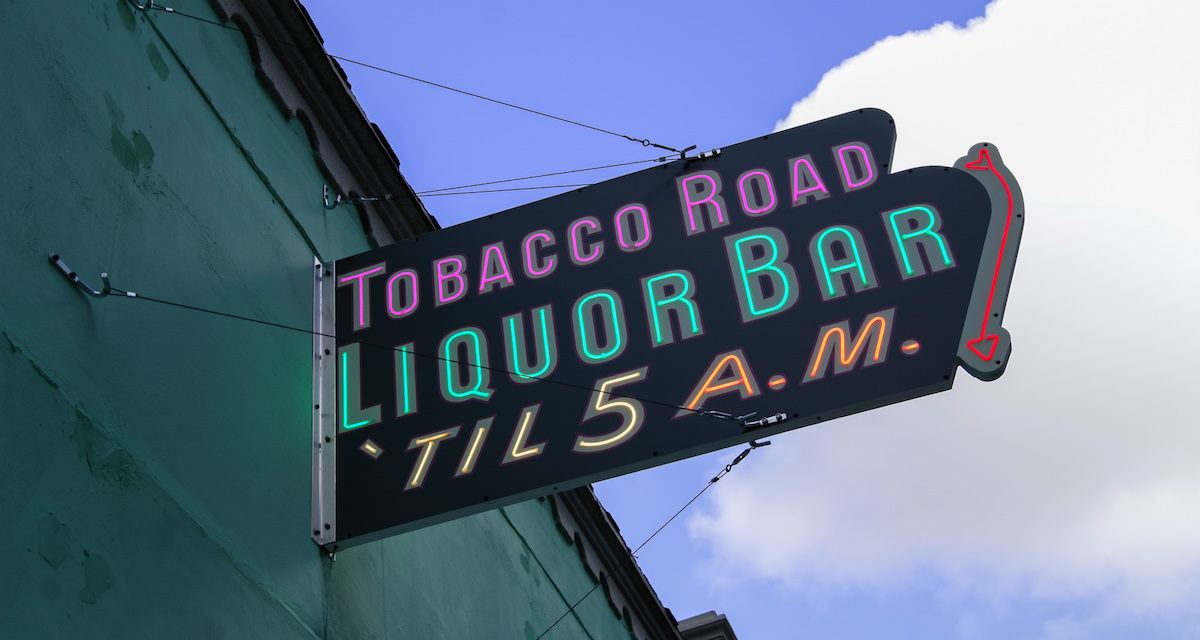 It was an inarguable loss for Miami when Tobacco Road – the Magic City’s oldest bar with a liquor license dating back to pre-Prohibition – closed its doors in the fall of 2014. In a city blessed with the power of reinvention and driven to deliver “the new,” the Road was a holdover from a bygone era of bootleggers and gangsters, barflies and brawlers. And though Tobacco Road’s glory days are gone, a new chapter is being written and, not surprising, its author is one of Miami’s foremost proctors of pop culture, Matt Kuscher of Kush Hospitality Group. Reopened in March 2021 in downtown Miami’s Brickell area, Kush’s tribute to Tobacco Road – 50% pop up, 50% homage and 100% dive bar chic. The slogan is simple, “This ain’t the real Tobacco Road.” The goal here was not to recreate the original Tobacco Road, surely you can’t replicate something with so much history. Though the spirit of the iconic watering hole is completely intact – a spot people can come to eat, drink, reminisce and indulge in a little nostalgia – and have some fun in the process. Available for lunch, dinner and delivery daily, the menu at Tobacco Road by Kush reads like a “greatest hits” compilation of American bar food, with just the right amount of elevation. The menu is everything you’d want to eat at a great bar with the twists you’d expect from a Kush Hospitality. Tobacco Road by Kush is located at 650 South Miami Avenue in Miami’s Brickell neighborhood. The restaurant is open Sunday – Thursday 11:30AM to 11PM; Friday & Saturday 11:30AM to Midnight. Telephone: (786) 703-3120; https://kushhospitality.com/

Abba Telavivian Kitchen, a chic Israeli-inspired restaurant from hospitality entrepreneurs Omer Horev and Sam Gorenstein, opened March 2021 in Miami Beach’s South of Fifth neighborhood. Abba brings the flavors of Middle Eastern and Mediterranean cuisine to Miami – Gorenstein’s imprint can be found in many of the Syrian and Latin flavors on the menu, while Horev’s Moroccan roots are the inspiration for several dishes as well. Plates go beyond typical American expectations of Middle Eastern menus and feature dishes one would find in a café in Tel Aviv – fresh food that showcases the melting pot of flavors from the Middle East, North Africa and Europe. The restaurant serves breakfast and lunch, with dinner planned for the future, as well as a sunset menu featuring nisnushim (snacks), coffee and tea, craft beers and wines from regional, boutique producers with a focus on Israeli selections. Offering a bevvy dishes perfect for sharing, diners can make a meal of a number of salatim, salads, pastries and burekas as well as entrée sized plates, pitas and Jerusalem bagels. Abba Televivian Kitchen is located at 864 Commerce Street on Miami Beach. Open Tuesday – Sunday from 8AM to 7PM. The restaurant is closed on Mondays. For more information, www.abbatlv.com. Walk-ins only; metered street and valet parking available.

Opening Spring 2021, Botánico Gin & Cookhouse (Botánico) will be Miami’s first gin-centric eatery — a convivial gathering place where contemporary cuisine and neighborhood gin bar converge. Conceptualized by Partners/Co-Owners Ricardo Ordoñez and Chef Gerardo B. De Negri, the restaurant is located in the recently redesigned and relaunched CocoWalk complex in the heart of Coconut Grove. For the food at Botánico, Chef Gerry is employing his classic French training with inspirations from his culinary sojourns abroad to create an upscale yet approachable dining experience. Among the standouts on the opening menu are goat cheese dip; octopus carpaccio; arepas topped with duck confit, short rib, and pulled pork; grilled branzino with roasted vegetables; a French burger served on a croissant bun; and Ecuadorian ceviche – a family recipe passed down to Ricardo from his mom – made with fresh shrimp marinated in flavorful a tomato-lime base with onions and cilantro.  As the name suggests, Botánico will offer an extensive gin-focused cocktail menu in addition to a well-stocked full bar menu. At Botánico, guests can choose from fifteen Gin & Tonic botanical variations including cucumber jelly & lime twist; green apple & thyme; grapes & crystalized ginger; and lavender & lemon twist. Botánico Gin & Cookhouse is located in CoCoWalk at 3015 Grand Avenue, Suite 123 in Coconut Grove. www.botanicomiami.com

La Traila BBQ, Miami’s genuine Texas-style craft barbecue pit spot, is set to open its first brick n’ mortar location May 2021. Founded by Austin native and pit master Mel Rodriguez and Miami native/Buffalo Bills Wide Receiver Isaiah McKenzie, the hotly-anticipated BBQ hotspot will be located in Miami Lakes. The opening will signal La Traila brand’s first permanent home to date; it has only existed as a “first come, first served” style pop-up, a holy grail-ish “must try” for local BBQ enthusiasts. With 28 seats indoors and 32 seats outdoors, La Traila will have a cool fast casual feel. The team has hopes of building out the outdoor space over time to give it a true homestyle BBQ family atmosphere. Smoked to absolute perfection, BBQ lovers can expect items like Brisket Sundae with a mac and cheese base then layered with baked beans and cream corn then topped with smoked brisket, cotija cheese, crema and house sauce; platters and meat by the pound like Smoked Pulled Pork, Smoked Sausage, Pork Spare Ribs and Texas Style Brisket; and for some Miami and Texas fusion – Brisket y Queso Empanadas and Smoked Pork Rib Croquettes. Sides will include cookout specials such as Mac n Cheese and Baked Beans. Beer and wine selections will be on offer. Takeout will also be available and catering options are offered upon request. La Traila is located at 8030 NW 154th Street in Miami Lakes, Florida. Lunch and dinner will be offered Tuesday through Sunday. For more information, please visit www.latrailabbq.com. Follow on Instagram @latrailabarbecue

Opening its virtual doors Spring 2021, MUNCH is Miami’s new virtual food hall, signaling the epic collaboration of two widespread culinary trends – the modern food hall and ghost kitchens. Bringing together a plethora of Miami-based culinary concepts under one roof, MUNCH will allow customers the convenience to feed every craving, be it sinful or sublime, through one virtual access point and one point of sale. It is the brainchild of three experienced restaurant executives: Srinath Perera, a former Yum brands, Burger King and Reef Technologies executive; Chef Aaron Dreilinger of Florida Avenue Hospitality and former chef of Celebrity Cruise Lines; and Nedal Ahmad, Co-Founder and former CEO of PINCHO. To empower small businesses, many of which being women and minority-owned, the Coconut Grove based multi-concept eatery will launch with an eclectic mix of local concepts including 2 Korean Girls,  Baba-G’s and Pin Up Taco, with additional vendors – including Sabowl, AMP Burger, Food Parm and Saucy Flamingo by Miami Brewing Co – launching soon thereafter. MUNCH concepts will be available for delivery on UberEats within a 5-mile radius from the kitchen (Pinecrest, Coral Gables and Brickell); or for pickup at the Coconut Grove kitchen. MUNCH is located at 2801a Florida Avenue in Coconut Grove. For more information, visit www.eatatmunch.com/; @eatatmunch.

The beloved Portland-based ice cream brand Salt & Straw opened its second Miami location in March 2021 in the newly reimagined CocoWalk. The small-batch, family-owned ice cream brand offers its curiously delicious flavors as well as some creations inspired by and uniquely made for the Magic City. The scoop shop’s menu mirrors the Wynwood shop, which opened in February 2021, and features Salt & Straw’s handmade cult classics and specialty flavors that tell the story of Miami through the unique chefs and artisans in the city. The menus rotate monthly to highlight seasonal creations. Beginning on April 23, the menu will change at both shops to offer Salt & Straw’s Eat Your Flowers menu, which highlights vivid flowers, bright fruits and potent aromatics; and makes a great, edible alternative to a classic bouquet. Salt & Straw CocoWalk is located at 3015 Grand Ave #145; Salt & Straw Wynwood is located at 246 NW 25th Street. The shops are open daily from 12PM to 12AM. www.saltandstraw.com. 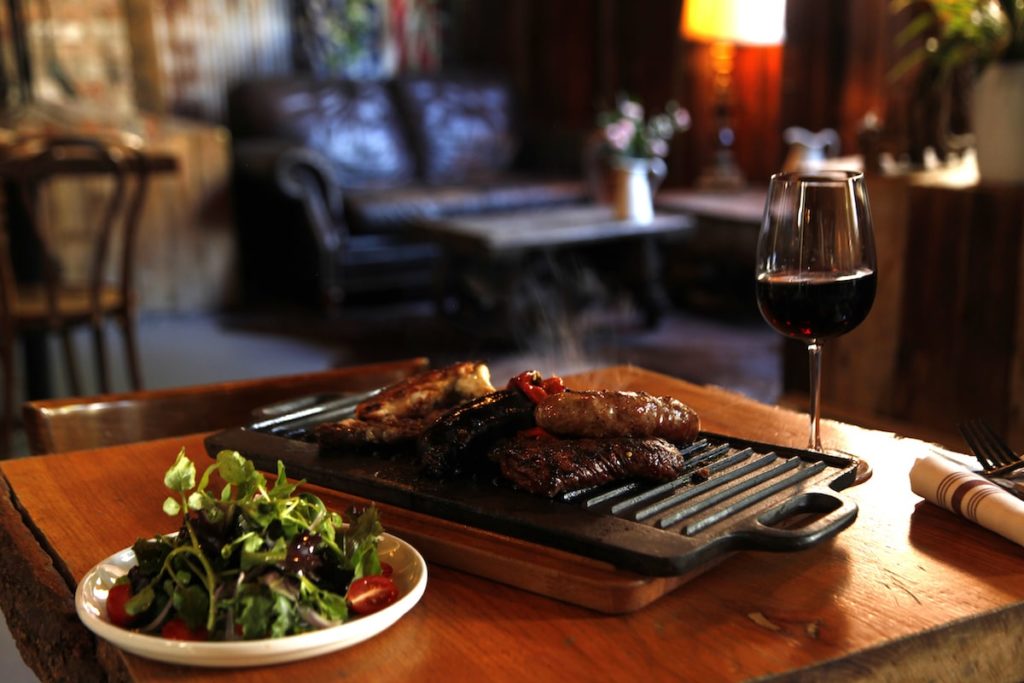 Among some of the hippest new spots to take root in South Florida this Spring is Shelter, Brooklyn’s acclaimed wood-fired restaurant and bar, which opened there September 2013. Shelter Wynwood, which opened its doors in March 2021, features the woodsy, “hunting lodge chic” design and style that has made it such a Williamsburg staple and will certainly play well in Wynwood given its artistic, bohemian vibe. Overflowing with delicious, rustic fare, informed by its creators’ Italian and Argentine roots and fueled by a wood-burning oven, the menu promises variety, bold flavors and crave-able simplicity. Starters range from steamed mussels with crunchy fire-toasted bread; crispy artichokes with pecorino cheese dip, a meat & cheese board with all the fixings; truffled mac & cheese and fresh ceviche mixto. Pizzas, available gluten free if desired, are a fixture here. Main-plates range from a roasted half-chicken with mashed potatoes and a delicious burger to parillada for two – ribeye, chorizo, morcilla, skirt steak, chicken – served with roasted vegetables and fries and slow-braised double rubbed pork ribs. Shelter Wynwood also has a varied beer list emphasizing local and/or independent brewers, as well as a thoughtful wine and craft cocktail list. Shelter Wynwood is located at 10 NE 27th Street in Miami. Dinner served Monday – Sunday. Telephone: (305) 603-8970; www.shelterbrooklyn.com. Follow Shelter on Instagram @shelterbrooklyn