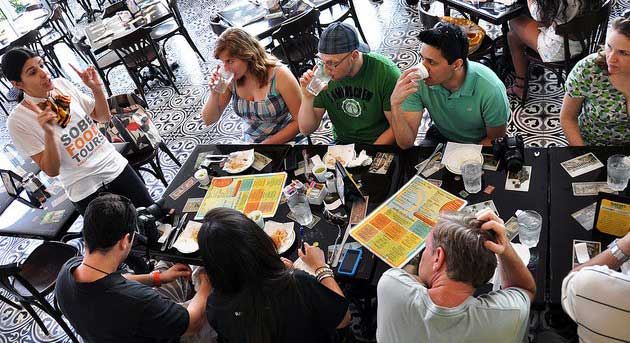 The South Beach Food Tour conducted by local food experts will be showcasing a Cuban classic to celebrate the colorful Cuban-American culture on its highly acclaimed food tour that takes place in Miami Beach, Florida.

The Miami food tour takes people through a culinary journey tastings the diverse multi-culture flavors that make up the area with a stellar introduction to Elevated Cuban cuisine crafted by the Godfather of Nuevo Latino Cuisine, a James Beard award-winning chef.

The new dish added to the tour menu is a reflection of the Latin culture in Miami, and participants get to taste a perfectly fluffy crust, light and wholesome, juicy crab or chicken empanada among other savory dishes. The food tour pays tribute to Cuba by tasting delectable dishes at one of Miami Beach’s best Cuban restaurant.

“Most cultures have their version of ingredients wrapped in dough, if we look at the Asian culture you have the savory dumplings, the Italians with their magnificent calzone, the Eastern Europeans with their pierogies, America has the turnover, India has the samosas and the list goes on and on. This is a broad genre of foods that reaches across cultural borders. Cuba as well as the majority of Latin American countries has the empanada. The one we taste at the tour serves as an introduction to one of Miamians’s favorite bites” Says Grace Della, founder of Miami Culinary Tours

The South Beach Food Tour is a guided edible journey through the Art Deco District, the largest concentration of Art Deco architecture in the world. Attendees get the chance to learn about the area’s history, architecture and culture while stopping between five to eight local favorites to taste dishes crafted by South Beach’s most celebrated chefs and talented kitchens.

About Miami Culinary Tours
Highly rated by travelers and locals on one of the most visited online travel portals under “Things to do in Miami,” the Miami Culinary Tours introduces the many cultures that make up the area through the food, and provides a walking guided tour of the Art Deco district with commentary as to history, culture and architecture of the area.