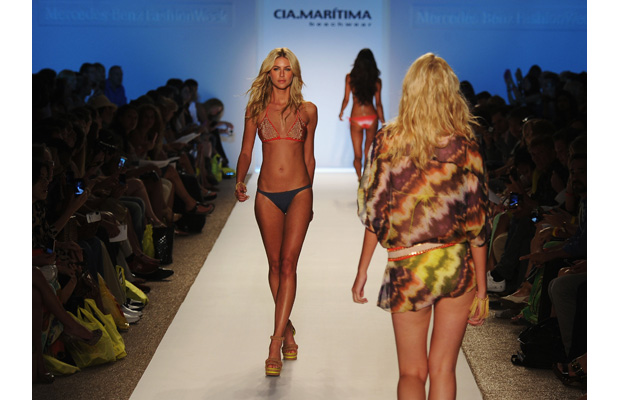 Miami is widely considered the axis between Europe and the Americas, with South Beach as its glamorous epicenter. The city is therefore the natural selection to host the country’s largest International and Hispanic fashion event, the 14th annual Miami Beach International Fashion Week, set to take place March 21st-24th at the Miami Beach Convention Center. This year, the event is proud to welcome music legend and style icon Dionne Warwick who will share her expertise in and around the world of celebrity and fashion.

Miami Beach International Fashion Week (MBIFW) is the longest standing fashion event in Miami, and has received worldwide recognition and fame for discovering and showcasing the best fashion from around the world. Featuring eminent designers, celebrities, and musicians from nearly every continent, Miami Beach International Fashion Week promises to once again set the stage as the gateway to the world’s most innovative talents. 2012 will mark an exciting addition to the glamorous affair when it welcomes Superstar Dionne Warwick. An idol in the music industry for over four decades, Mrs. Warwick will host a media seminar for students and designers in which she will discuss her life, her style, and advise how to succeed in your chosen passion. Warwick was famously mentored about her own personal style by one of Hollywood’s all time greats, Marlene Dietrich.

MBIFW has secured a reputation for introducing American buyers and consumers to up-and-coming designers from around the world who have gone on to illustrious careers in the U.S. The event is often the first opportunity for fashion industry insiders to capture a glimpse of the designers they’ll soon feature in their own magazines, stores, and closets. “Over the years, discovering the world’s best emerging designers has been a wonderful and exciting experience. By creating the international platform through MBIFW that allows these designers to be seen by the entire world, we have been able to launch their careers to the next level,” explains MBIFW President Beth Sobol. “Many of our young designers, including Colombia’s Esteban Cortazar and Silvia Tcherassi, Peru’s Sitka Semsch, Chile’s Ruben Campos, Manish Arora and Sabyasachi Mukherjee from India, Furne One for Amato Couture in Dubai and Heather Jones from Trinidad & Tobago are just a few of today’s fashion industry stars who have emerged from our runways. As an invited guest, judge and speaker at many of the worlds emerging fashion events, we continually seek to discover the best of the best from every corner of the globe.”

This year’s slate of events, designers, and performers promises all of the excitement the fashion world has come to expect from this prestigious event. Highlights of the week’s line up include the Miami Style Showcase featuring Florida’s top designers including Viviana G for Petit Pois, Ema Savahl Couture and Kayce Armstrong of Art of Shade among others. The Prêt-A-Porter Designer showcase will feature the winner of Bolivia’s Mision Moda, Banja Luka Fashion Fair Designer Showcase featuring Marina Banovic, Liliana Majkic, and Davor Sladakovic from Bosnia & Herzegovina and Montenegro, Latin Fashion Weeks Council Showcase with the best designers from throughout Latin America and more. Additionally, for the first time in the U.S., Walla Al Alawi of the Kingdom of Bahrain, widely considered the trendsetter for the Gulf region, will grace the runway with her latest collection. Walla’s customers include numerous members of the Gulf’s royal families and her designs have already been picked up by Saks Fifth Avenue Bahrain. In addition to Mrs. Warwick, there will be celebrity appearances by Grammy Award winning music producer Damon Elliott and the Miami Moda & Music Awards will feature a showcase of Red Carpet gowns worn by some of Hollywood’s and Latin America’s biggest stars by designer Nicolas Felizola and a special performance by Supermodel and the face of Lancôme Russia, Dasha, performing her new hit, ” The Prfct Girl.”

MBIFW is considered the fifth largest and most important fashion event on the world’s fashion calendar. Sobol and her team spend the year scouring the globe to uncover the most creative and elite designers from hundreds of countries and invite them to present their collections on the Miami Beach runway. In past years, designers have hailed from the Americas, Caribbean, Europe, Asia, The Middle East and Africa. In 2011 MBIFW hosted 55 designers from 32 countries, 650 international media outlets and received over 740 million global media impressions worldwide. 2012 will showcase even more designers from more countries than ever before and has secured media partners including Vanidades, Harper’s Bazaar en Español, Latina, Miami Modern Luxury and GLITZ TV Latin America.

For more information and to purchase tickets for Miami Beach International Fashion Week please visit www.miamifashionweek.com. Become a fan at http://www.facebook.com/MiamiInternationalFashionWeek and follow us on Twitter http://www.twitter.com/MiamiFashionWk