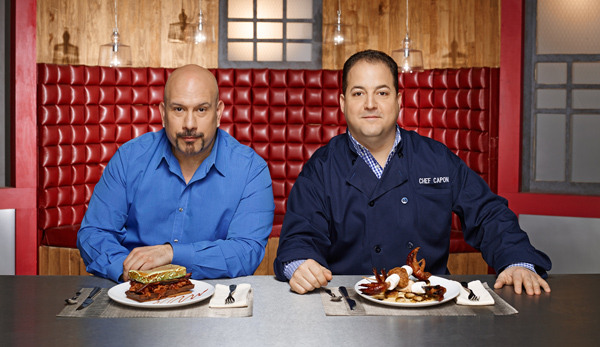 Step aside chicken and waffles, buffalo wings and chili cheese dogs, Spike TV is looking to find the newest food craze. Starting Sunday, June 22 at 10 PM, ET/PT with back-to-back episodes, amateur chefs will literally “step-up to the plate” to prove their dish is the best new “Frankenfood,” a revolutionary creation that mixes outrageous and unexpected ingredients in delicious and unique flavors. From a triple-decker pastrami donut sandwich to fried PB&J fish sticks and Gyro egg rolls to a cheesecake burger, the food creations on this series range from the good, the bad and the truly inedible!

Each episode of “Frankenfood” features the best and worst local amateur food innovators competing head-to-head in order to get their unexpected food concoctions onto the menu of a popular local restaurant, win a $10,000 cash grand prize and possibly create the next big food craze.

Viewers will get a look into the kitchen to see how these budding culinary artists whip up their inventive food combinations and find out the inspiration behind their dishes. Ranging from old family recipes to regional specialties and even hangover remedies, “Frankenfood” will bring to light some of the most mouth-watering and sometimes stomach churning combinations ever conceived.

It’s up to superstar executive chef Josh Capon, a four time winner of Rachael Ray’s “Burger Bash,” and world-renown cheesesteak king, Tony Luke Jr., along with a rotating panel of culinary experts serving as judges to decide which creative and often outlandish dish earns a spot on the menu.

Fans of “Frankenfood” can join the conversation about the show by following @SPIKETV on twitter and using #Frankenfood.  Sneak peeks of upcoming episodes, blog posts, full episodes, biographies and more can be found on Spike.com’s dedicated “Frankenfood” destination, spike.com/shows/frankenfood, where content will be updated throughout the season.  For additional series updates, follow Spike on Facebook and on Instagram.

Josh Capon is the seasoned executive chef and partner behind Lure Fishbar, B&B Winepub and El Toro Blanco in New York City, and Lure Fishbar which opened recently in South Beach, Miami. Capon graduated from Johnson & Wales University and while in culinary school, Charlie Palmer selected Capon as the culinary “extern” at Aureole, Palmer’s acclaimed Manhattan restaurant. After graduating in 1994, Capon accepted an offer from Palmer to assist in the opening of The Lenox Room. From there, he went on to work for David Burke at the Park Avenue Café, where he was offered an exchange opportunity to work in Europe. He spent the next year honing his cooking skills in several different restaurants throughout France, Italy, Germany and Spain before returning to the US and building his own culinary empire. Capon is also a four-time champion of Rachael Ray’s annual Burger Bash competition.

Tony Luke Jr. is a restaurateur, entertainer, actor, musician, Philly’s favorite son and the face behind Tony Luke’s.  Tony Luke’s has 20 stores nationally and in the Middle East.  Tony Luke’s has been praised byGourmet magazine, The New York Times, GQ and is included in Philadelphia Magazine’s “Best of Philly” Hall of Fame.  Luke is a graduate of the famed Philadelphia High School for the Creative and Performing Arts.  His acting credits include Invincible, 10th & Wolf, and The Nail.