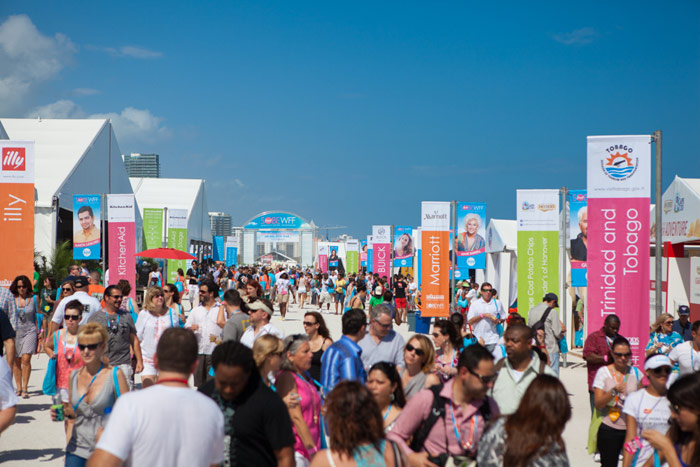 The Food Network & Cooking Channel South Beach Wine & Food Festival presented by FOOD & WINE (SOBEWFF) is pleased to announce its event line-up for the Festival’s 15th anniversary, taking place February 24 – 28, 2016.  Recently recognized as the #1 food and restaurant industry event in the U.S. by BizBash for the third year in a row, the Festival has raised more than $22 million to date for the Wine Spectator Restaurant Management Laboratory and Southern Wine & Spirits Beverage Management Center at the Chaplin School of Hospitality & Tourism Management located on Florida International University’s Biscayne Bay campus.

“We are excited to unveil our event program for our 15th year,” said Lee Brian Schrager, Festival Founder and Director, who also serves as Vice President of Corporate Communications & National Events for Southern Wine & Spirits of America, Inc.  “With the introduction of the Festival’s new Taste Fort Lauderdale Series and the 10th birthday of our iconic Burger Bash® hosted by Rachael Ray, we’re looking forward to celebrating with everyone.”

The inaugural edition of the Festival’s new Taste Fort Lauderdale Series will begin on Wednesday, February 24 with Seaside Eats hosted by Robert Irvine at the historic Bonnet House Museum & Gardens, featuring pours from Chȃteau D’Esclans.  The series will include a selection of intimate dinner experiences taking place at various Fort Lauderdale restaurants and featuring renowned chefs and culinary personalities like Todd English, Debi Mazar & Gabriele Corcos, Marc Vetri, and Auberge Resorts’ Robert Curry and Paul Lemieux.  Culminating with a Bloody Mary Brunch hosted by the Cast of Chopped at The Ritz-Carlton, Fort Lauderdale on Sunday, February 28, the introduction of the Taste Fort Lauderdale Series marks a natural evolution of the Festival in its 15th year.

New Festival events in 2016 also include:

Popular returning events for the 15th year include:

The Festival is also pleased to pay tribute to chef, restaurateur and author Jonathan Waxman and Constellation Brands’ Chairman of the Board Richard Sands and President and CEO Rob Sands.  The 15th anniversary Tribute Dinner presented by Bank of America will take place at the Festival’s host hotel Loews Miami Beach, as it has since SOBEWFF’s inception in 2002.  Master of Ceremonies Tom Colicchio will oversee the evening as guests honor the contributions of this extraordinary group of gentlemen.

All proceeds from the Festival benefit the students of the Florida International University Chaplin School of Hospitality & Tourism Management who also assist Festival organizers with sponsorship fulfillment, restaurant and exhibitor recruitment, logistics, and inventory as well as working alongside some of the world’s greatest celebrity chefs and winemakers. To date, the Festival has raised more than $22 million for the School. In September 2015, BizBash named the Festival the #1 Food & Restaurant Industry event in the United States for the third year in a row.