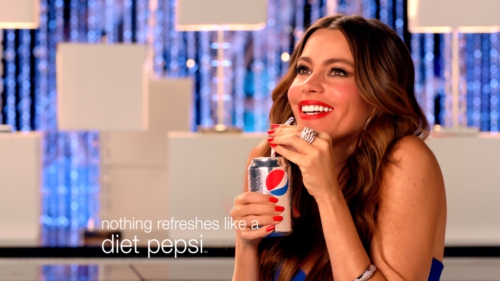 Diet Pepsi and actress Sofia Vergara come back together again with a new marketing campaign that continues to demonstrate that “Nothing Refreshes Like a Diet Pepsi.” The new TV commercial will debut on the 69th annual Golden Globes awards show this Sunday, January 15, 2012.

In the new spot, Vergara uses her wit and charm to dance her way past a cast of suitors in a sultry Miami nightclub to get to a refreshing can of Diet Pepsi.

“Our consumers really connect with Sofia Vergara, and they enjoyed last year’s spot with David Beckham so much that we wanted to build on the storyline. The great lengths our star will go to get a refreshing Diet Pepsi brings our message to light in a fun, uplifting way,” said Amy Wirtanen, Senior Director Pepsi Beverages Corporation.

Vergara, who got her break in a Latin American Pepsi commercial years ago, continues her role with the brand as the face of Diet Pepsi for the second year running. The new spot, directed by acclaimed director McG and choreographed by Mark Ballas, of Dancing with the Stars, is set to a flirty and uplifting rendition of the iconic song, ‘Whatever Lola Wants,’ by Ruby Stewart, Rod Stewart’s daughter.

“I love our new Diet Pepsi campaign. It is amazing, this commercial is 100% fun. I had a blast dancing and enjoying great music in great company, all in a cool night club, fue lo maximo! I can’t wait for audiences to see it,” said Sofia Vergara.

Subsequent to the Golden Globes premiere, the ad will air nationwide on CBS, ABC, NBC, Bravo, E!, and the Food Network, among others. The campaign includes new print, digital and out-of-home ads.

The commercial was shot at the Liv Nightclub at the Fontainebleau Hotel on Miami Beach. Watch the behind-the-scenes video of Sofia’s commercial, below!