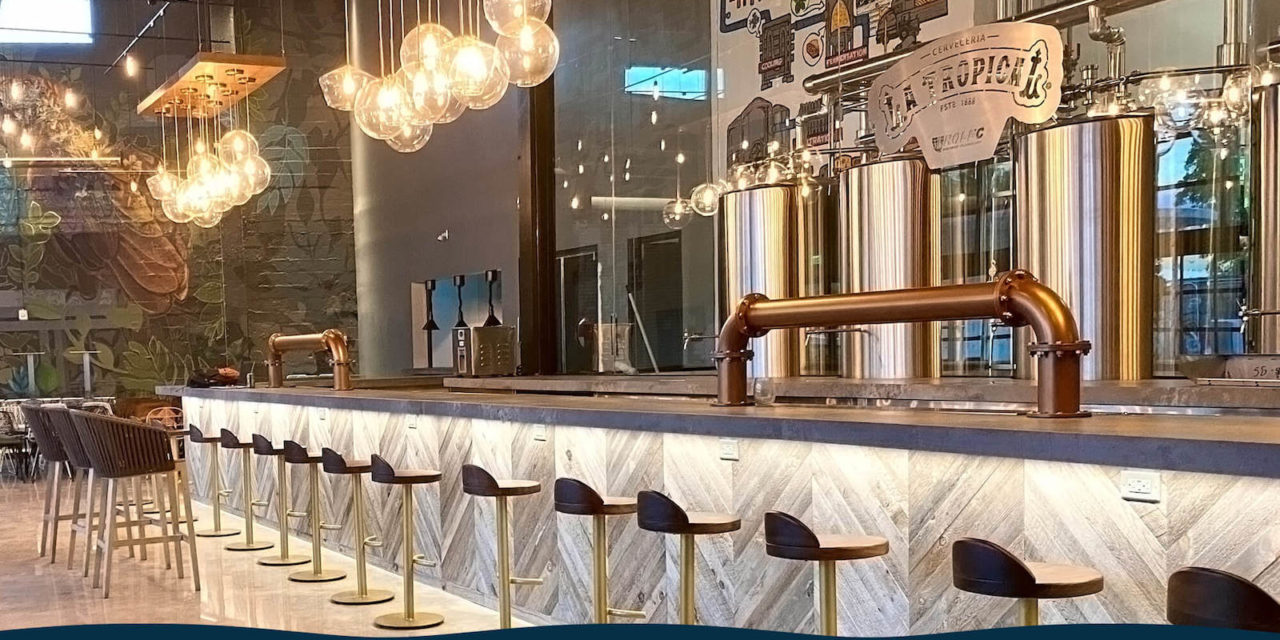 The highly-anticipated Cervecería La Tropical, Miami’s newest brewery, will celebrate its grand opening on Friday, February 19 in the Wynwood Arts District with live music acts throughout the weekend. Embracing the alluring and high-energy spirit of Miami by way of Cuba, Latin America and the Caribbean, La Tropical will feature a state-of-the-art onsite brewing operation, accompanied by a taproom, restaurant and botanical garden, as well as, an ongoing event schedule, art installations and live music stage.

With the aim to become a cultural community center for all of Miami – with the historical beer at its core – La Tropical has an annual brewing capacity of 32,000 hectoliters per year and can house up to 800 craft beer lovers. The brewery will be led by Brew Master Matt Weintraub, who earned his reputation creating award-winning craft beer at the Florida International University Brewing Program. The taproom will offer over 20 handcrafted beers passionately choreographed to create a dance of the senses, ranging from lagers, IPAs, sours, barrel-aged, and ales infused with local ingredients and the brand’s flagship La Original Ambar Lager, whose recipe is inspired by the original dating back to 1888.

The 28,000 square-foot space will also house a Latin Caribbean-inspired restaurant by Miami’s own Chef Cindy Hutson. Outdoors, consumers can explore a lush 10,000 square-foot botanical tropical garden – Jardines La Tropical – and, in keeping with the neighborhood, a selection of commissioned murals and art by local artists.

The brewery’s popularity dates to 1888 when Cervecería La Tropical was inaugurated, establishing the Cuban beer industry. La Tropical was originally founded by the Blanco Herrera family on the banks of the Almendares River near a section of Havana known as Kohly. This area was established by Federico Kohly, who sold the land for the brewery to the Blanco Herreras. La Tropical quickly became a source of national pride, recognized as the largest and most popular brewery on the island and considered a must-visit for locals and tourists alike for cold cervezas, live music, dancing and walks in the tropical garden that was later built in 1904.

La Tropical’s roots in the United States date back more than two decades, through the sale of a Florida-brewed pilsner beer and, more recently, through a successful launch of La Tropical’s La Original Ambar Lager in 2016 that generated a great deal of excitement in the community, with consumers lining up for hours for a taste of La Tropical’s original recipe. In turn, La Tropical garnered national and international attention within the industry. A joint venture with Heineken ensued and La Tropical embarked on a mission to build a new and permanent home for the brewery in Miami, purchasing real estate, building the brewery, hiring and training staff and researching and developing the 20 handcrafted beers that will be available on-site. The enormous task was made more difficult by the COVID-19 pandemic, which pushed back the planned Spring 2020 opening.

Manny Portuondo, CEO, Cerveceria La Tropical and great-great-grandson of Federico Kohly said: “The rebirth of Cervecería La Tropical represents a dream come true, fulfilling a lifelong passion to resurrect the brewery with a new permanent home in Miami – a city infused with Latin and Caribbean sabor. More than a century after La Tropical was originally founded, I am proud and excited to be creating a new cerveza, food and cultural destination that unites La Tropical’s Cuban soul with Miami’s diverse and unique culture that has made the city the Gateway of the Americas.”

Marc Busain, President HEINEKEN Americas said: “The La Tropical story is a universal tale of loss and rebirth that everyone can relate to. The brand also had a proud and award-winning past that made it world famous. HEINEKEN is proud to lead this venture and help La Tropical make it so again. We look forward to seeing consumer reception of this exciting beer brand and to accelerating the roll-out to additional markets in due course.”

La Tropical will celebrate its grand opening on February 19, 2021 in Wynwood at 42 NE 25th Street and will be open Tuesday through Thursday from 4PM-11PM; Friday from 4PM-2AM (12AM during curfew); Saturday from 12PM-2AM (12AM during curfew); and Sunday from 12PM-11PM. The brewery also has plans to distribute its beer in cans and on draft at local restaurants, bars and supermarkets from Palm Beach to Key West, starting in March. For real time updates, consumers can follow Cervecería La Tropical at @LaTropicalBeer on Instagram, Facebook and Twitter or visit www.cervecerialatropical.com.