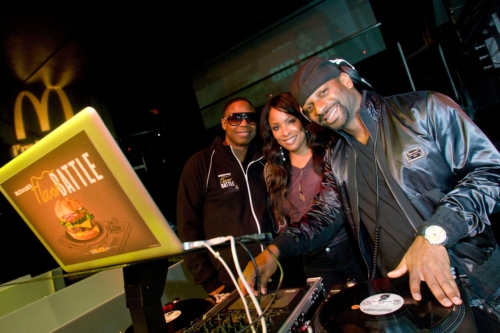 A panel of celebrity DJ judges last night crowned San Francisco-based DJ Risk One as the 2012 Flavor Battle Champion. The 2012 McDonald’s Flavor Battle DJ competition finale event took place at the Miami Beach nightclub Cameo, where three DJs each representing a McDonald’s burger took to the turntables in a battle of burgers and beats to win the $10,000 grand prize and championship. DJ Risk One represented the Big Mac and beat out first runner-up DJ E-V from Cleveland, Ohio, and DJ Alizay from Washington, D.C., to claim the McDonald’s 2012 Flavor Battle championship title.

Judged on crowd appeal, mixing skills, technique and performance flow, each finalist demonstrated their mix-master skills in a free-style battle to prove who had the most musical flavor and talent. McDonald’s and Complex Media kicked off the 2012 Flavor Battle competition last November with a total of 24 DJs representing three regions of the U.S. and three of McDonald’s burgers — the Angus Third Pounder, Double Quarter Pounder with Cheese and Big Mac.

“Once again, McDonald’s is proving that we can deliver tasty burgers and hot beats to our customers,” said Rob Jackson, director of U.S. marketing, McDonald’s USA. “Flavor Battle gets more exciting each year as we recognize the most talented of mix masters throughout the country.”