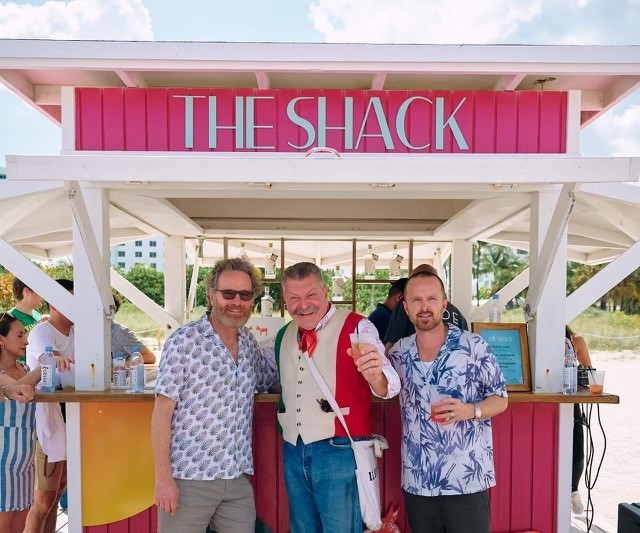 SLS South Beach launched the new beach Shack Series right on the sand behind their hotel on the beach. Featuring Dos Hombres, hosted by actors and founders Bryan Cranston and Aaron Paul. The Breaking Bad stars interacted with guests, made cocktails, and posed for photographs. Aaron even took some fans’ phones and called their family members on FaceTime telling them they’re missed in Miami and they should be there.

When The Miami Guide asked Cranston how he meet his Mezcal maker, he joked that they met on Grindr. Everyone laughed.

The two handsome actors, joined by Chef Dario Cecchini, stayed on the beach for over an hour having a blast, part of Formula 1 weekend.

This pop up will last for three months. Chef Dario Cecchini also hosted a Carna dining pop-up at SLS Brickell this past Thursday and Friday.

We appreciate your consideration, and of course if you’re in the Miami area, we would love to host you on the property. We could set you up on the beach with some chairs to enjoy some of their signature cocktails, like the Dos Hombres Mezcal Margarita and Mule.