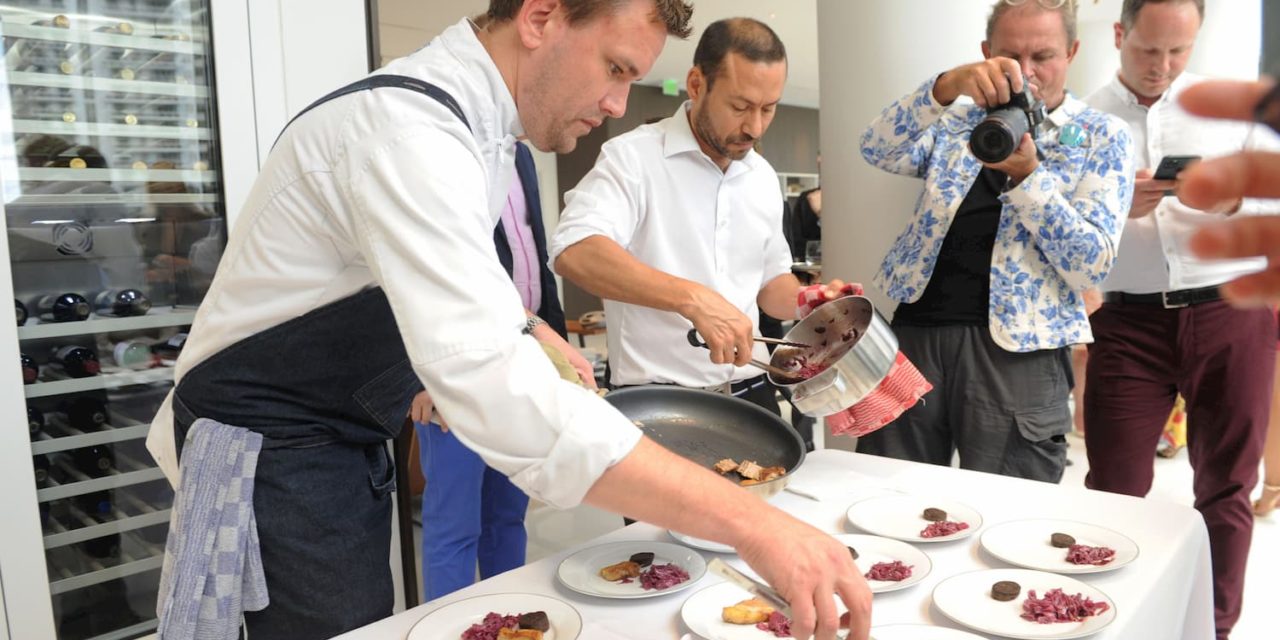 G&G Business Developments announced the addition of its luxury kitchen amenities available to owners and their guests at the Aston Martin Residences in Miami on Tuesday, February 18th, with a royal and retrospective celebration of British cuisine in collaboration with one of today’s leading and award-winning British chefs.

To commemorate the enduring heritage of English gastronomy and to kick-off the annual week of Wine & Food festivities, the coveted luxury development showcased the new Aston Martin Residences Kitchen and the historic excellence of Britain’s classic dishes enjoyed by members of the royal household over several decades, as part of a unique collaboration with the acclaimed British Chef Justin Brown. Chef Brown made a highly anticipated debut appearance in Miami on Tuesday to unveil this culinary alliance, with a special cooking demonstration in front of invited guests at the Aston Martin Residences sales centre in downtown Miami. The preview event paid homage to traditional English cuisine with a tribute to the celebrated British legacy Aston Martin is globally renowned for.

“The Aston Martin Residences Kitchen further harnesses the expression of Aston Martin’s design DNA and architectural excellence,” says German Coto, CEO of G&G Business Developments. “Gastronomy will play an important part of the family living experience at Aston Martin Residences, whereby the kitchen often forms the soul of the home for loved ones and friends who come together socially and culturally to share their passion for food. A shrouding of radiance, purity and warmth ensures the kitchen environment is both intimate and inviting for both casual cooks and the most seasoned gourmand, who can enjoy today’s top-of-the-line appliances and amenities with relaxing confidence. The Aston Martin Residences Kitchen pays homage to the Art of Living and our commitment to its indelible imprint of impeccable design.”

Invited guests of Aston Martin Residences experienced a taste of classic and contemporary British cuisine especially curated by Chef Brown, featuring a number of plates historically served to the royal family, including Fresh Salmon Confit with Garden Herb Salad (the appetizer at Prince William’s wedding);10 Hour Slow Roasted Pork Belly (the main course at Prince Harry’s wedding) and Sticky Toffee Pudding with Clotted Cream (a favorite of Her Majesty The Queen), The event was set against the picturesque waterfront backdrop of downtown Miami, while showcasing the world’s finest in kitchen design at Aston Martin Residences, featuring Gaggenau appliances and Bulthaup cabinets. 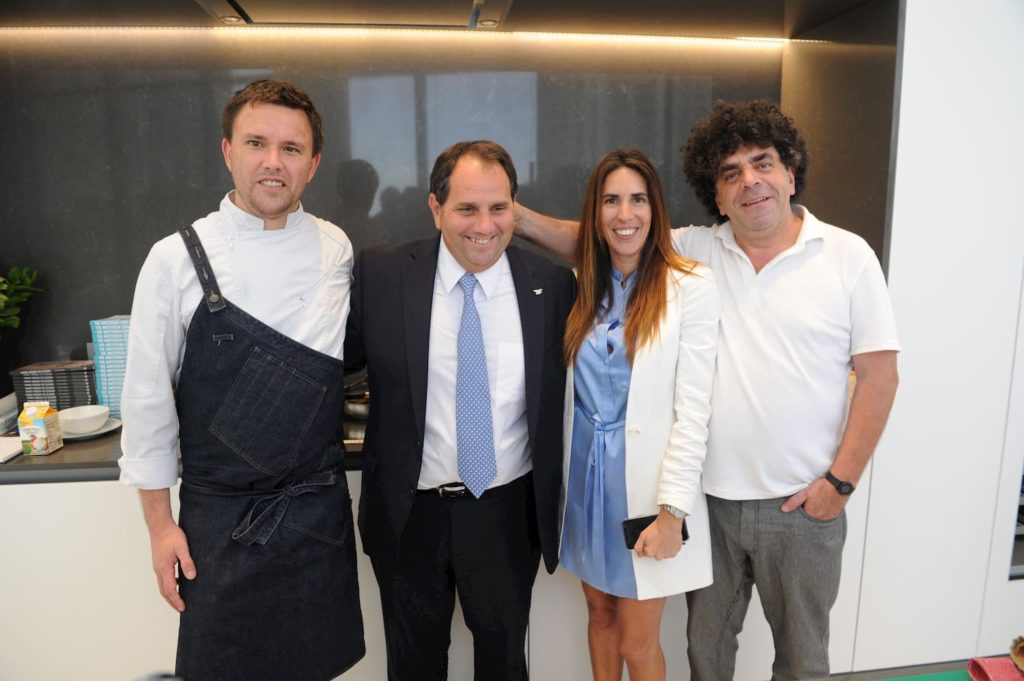 Award-winning Chef Justin Brown has relocated to Miami after spending more than 15 years at the helm of some of the leading restaurants in the UK and Europe, working alongside today’s most iconic personalities of the culinary world including Jamie Oliver and Robert Clayton.  Chef Brown realized how South Florida’s burgeoning gastronomic scene was an opportunity to infuse his own style of contemporary and upscale English cooking into a region that is historically unfamiliar with modern British cuisine. Chef Brown made his inaugural appearance in Miami with Aston Martin Residences to enlighten attending guests through an array of distinguished plates that honors the royal palate.

“I’m delighted to mark my debut in Miami by this most unique collaboration with Aston Martin Residences,” says Chef Justin Brown. “I chose a series of classic British meat and fish dishes that have been served and enjoyed as favorites of the royal family for generations. I pride myself on engaging the audience with a traditional culinary experience by cooking with authentic ingredients used in recipes taken from England’s southern counties, Victorian London and the Cotswolds region in particular, where the heritage of Britain’s royal family belongs. I also wanted to demonstrate the true character and essence of English culture and how you can really feel at home with your own comfortable style of cooking in the brilliance of an Aston Martin Residences Kitchen.” 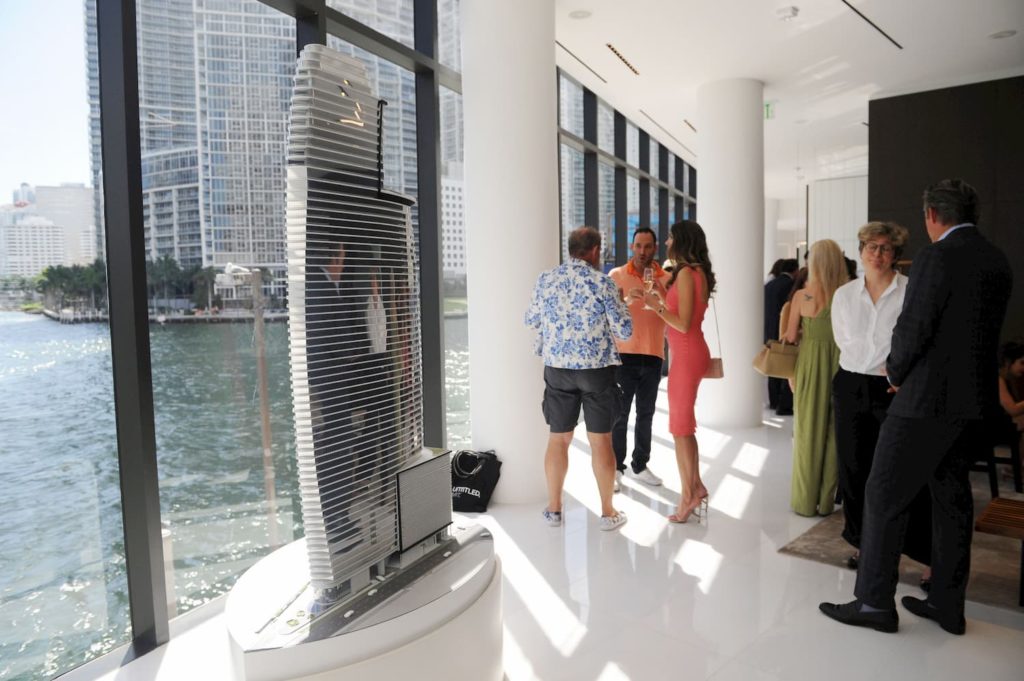 The extraordinary design vision for the Aston Martin Residences Kitchen by Marek Reichman, EVP and Chief Creative Officer at Aston Martin, was based upon the ability to bring balance and harmony between the outdoor tropical climate and the warmth of the indoor kitchen space. The 66-story building of curvilinear glass and steel will be a diamond-like centerpiece towering high above downtown Miami’s waterfront and therefore it was considered essential for the kitchen to alleviate the monumental grandiose of the property in order to install a sense of intimate luxury while cooking at home.